You are here: Home / Analysis / Why did Israel destroy a Syrian nuclear reactor? 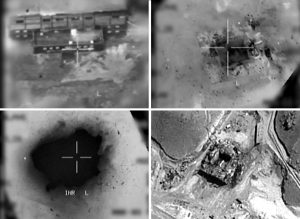 Israel has admitted it was behind an airstrike that destroyed a Syrian nuclear reactor, ending a decade of silence over the attack in September 2007, like reported by newsweek.com?

Military censors lifted a 10-year order of secrecy on the mission, Reuters reported, revealing that Israeli F-15 and F-16 warplanes targeted the al-Kubar facility near the city of Deir Ezzor in the east of the country.

It said the reactor was “an emerging existential threat to Israel and the entire region.”

The Israel Defense Forces (IDF) also released newly declassified video footage of the attack—known as Operation Orchard—as well as photographs and intelligence documents detailing the bombing and the planning of the mission, which used almost 20 tons of munitions.

Israel claimed that the reactor was being built with the help of North Korea and was only months away from activation. It kept the strikes a secret to avoid Syrian retaliation and possible escalation into a regional war.

Military commanders were told to place their troops on high alert in the hours leading up to the attack in case Syria decided to respond, The Times of Israel said. Although the attack was openly discussed abroad after its success, Israel imposed a domestic media blackout on the story to ensure that no details were leaked, the BBC reported.

Syria has consistently denied that there were nuclear facilities at the site, though the International Atomic Energy Agency has said it was “very likely” to have been a nuclear reactor.

Mossad—Israel’s national intelligence service—suspected that a nuclear site was being constructed since 2006, when they spotted the buildings, which they called the “Rubik’s Cube.” In March 2007, Mossad obtained photos from inside the facility, which showed North Korean officials at the site and confirmed the presence of a plutonium reactor, The Times of Israel reported.

Israeli officials then contacted the U.S. with their concerns and the CIA was asked to analyze the site. Although they agreed that Syria had likely built a nuclear reactor, U.S. officials were hesitant to carry out an airstrike as they were not convinced that the al-Kubar facility was capable of producing nuclear weapons. As such, Israel decided to proceed alone.

A video of the strike shows several bombs hitting the facility. Warplanes then make a second pass and bomb the rubble to ensure its complete destruction. The whole operation took four hours, the IDF said.

“On the night between 5-6 September 2007, Israeli air force fighter jets successfully struck and destroyed a Syrian nuclear reactor in development,” an IDF statement said. “The reactor was close to being completed.”

The announcement will be seen as a warning to Iran, which was conducting its own nuclear program until it agreed to halt development in exchange for the lifting of international sanctions in 2015. However, President Donald Trump and Iranian leaders have questioned whether the deal can be maintained. If it collapses, Iran will likely restart its nuclear project.

“The motivation of our enemies has grown in recent years, but so too the might of the IDF,” Israeli Defence Minister Avigdor Lieberman said on Wednesday. “Everyone in the Middle East would do well to internalize this equation,” he said, suggesting “a substantial threat to Israel and the region, in the form of a nuclear reactor, was being built in Syria.”

The Deir Ezzor region was captured and held for several years by the Islamic State militant group (ISIS) during the Syrian Civil War. “One could only imagine how much havoc they could have wreaked with a nuclear facility in their hands,” the IDF statement said.