You are here: Home / West Asia / Why did ISIS release a Chinese-language jihad song — and who sings it? 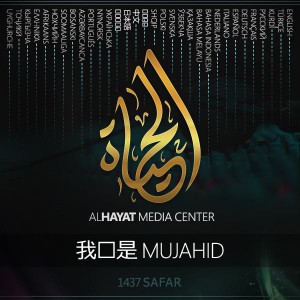 Islamic State terrorists have recruited a singer with an impeccable Chinese voice to sing a jihadist fight song for distribution over the Internet. The question is why is ISIS doing this and who is helping them?

ISIS released its first nasheed (Arabic for “chant”) in Mandarin Chinese. The nasheed titled “We are Mujahid,” like other ISIS songs, was sung a capella.

Analyzing the song from a musical perspective

The 4-minute song includes lyrics such as “the shameless enemy will panic, to die on the battlefield, this is our dream.” The repetitive lyrics and melody are easy for listeners to remember.

ISIS often uses nasheed, most of which are in Arabic, to motivate its followers. Hong Kong Baptist University associate professor of music Wong Chuen-fung said in an interview, “The melody is of course very catchy, with almost-hypnotic qualities. This is a common feature of religious and political songs. Brainwashing is one purpose of such songs.”

Wong believes that this particular song is very similar to other nasheed. Because the radical doctrine of ISIS forbids the use of musical instruments, all the chants are sung without musical accompaniment, and feature multi-part harmony with many sequences. Another key feature is the noticeable resonance effect added to the recording, similar to many contemporary recordings of Islamic scripture recitations.

This kind of singing is not new

The compilation of nasheed is not original to the Islamic State.

According to research by Friedrich Schiller University of Jena scholar Behnam Said, Islamic fundamentalists in Egypt and Syria began compiling nasheed during the “Islamic Revival” of the late 1970s-early 1980s to counter the influence of mainstream media, attract followers, and spread group information. The songs about political revolt written by groups exiled in Saudi Arabia like the Muslim Brotherhood were especially well-regarded and widely distributed. Osama Bin Laden, the previous leader of Al-Qaeda, had also established a nasheed musical group in the 1970s.

These moves, however, were also criticized by some Islamic fundamentalists, including those of the Salafi sect, who claimed they violate Islamic doctrine.

According to Behnam Said, most nasheed can be classified into four categories: songs of the battlefield, songs of martyrdom, songs of mourning, and songs of praise.

The Mandarin-language song recently released by ISIS is clearly a battlefield song intended to encourage fighters and their supporters.

Regardless of its motives, the Islamic State’s production of “popular style” songs shows what one online commentator calls “increasing soft power.”

Who is singing? Who is the target audience?

This is the first time the official propaganda agency of ISIS, the al-Ḥayāt Media Center, has produced a recruitment song in Mandarin. The song’s lead singer has sharp diction, giving listeners reason to believe he is fluent in Mandarin.

Why is ISIS releasing this Chinese-language nasheed with the enigmatic singer and the lyrics about “a century of enslavement” at this time?

“In the Jisr Al-Shughur conquered by Uyghurs, flags of the Turkistan Islamic Party (TIP) covered the streets,” the report stated. “The city after the battle looked more like China than Syria.”

After ISIS executed a Chinese national, it released a video titled “No Respite,” which placed the flags of both the Chinese mainland and Taiwan on a list of nations opposing ISIS.

Many believe that ISIS released its Mandarin-language nasheed at this time to attract Chinese-speaking fighters. In China, Muslim groups beside the Uyghurs include the Chinese-speaking Hui and other minorities. But is the song sung by a Chinese national who joined ISIS? This is still a mystery.

Propaganda posters released by ISIS also include Japanese and English text, but thus far there have been no other propaganda songs in other languages.