You are here: Home / Analysis / Why Democracy contradicts Sharia law (according to Daesh)

Pro-Islamic State media outlets have published an infographic explaining in 10 bullet points how democracy and Sharia law contradict each other, like reported by breitbart.com .

In it, IS propagandists outline democratic principles and how they are opposed to Islamic law. 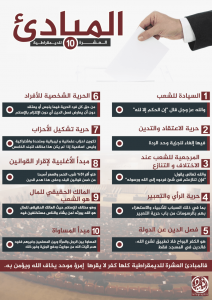 Here is a translation:

1.       The people are the sovereign vs. “Allah blessed be his name said: Allah is the only sovereign.”

2.       Freedom of thought and religion contradicts Jizia, a head tax that underwrites sanctions against infidels.

3.       Majority rule in conflicts – Allah says: “If you have disagreements, the teachings of Allah and the Prophet prevail.”

4.       Freedom of speech and expression – It includes, according to the proponents of democracy, the right to curse and offend and denigrate the prophets, including by using cartoons, under the pretense of the freedom of expression.

5.       Separation of religion and state – This transgression would allow the rules of Sharia to be unimplemented by those who claim that religion belongs only in mosques.

6.       Civil liberties – According to this rule, everyone can dress and think however they want without taking religion into account, without abiding by the principles of Islam.

7.       Multiplicity of political parties – This includes forming secular, liberal, socialist and nonbelieving parties, rather than Islamic ones.

8.       Majority rule – Fifty-one percent may decide that drinking alcohol and prostitution are legal. That is the end of religion.

10.   Principle of equality – Equality between men and women and between Muslims and non-Muslims is a destructive principle for religion and for Allah’s rules on heritage head tax and other issues.

In conclusion, the infographic relates, “The 10 principles of democracy are all one big transgression. A man who has his faith in Allah and fears him will never accept them.”