You are here: Home / Africa / Why Canada should take the fight against Islamic State to Africa 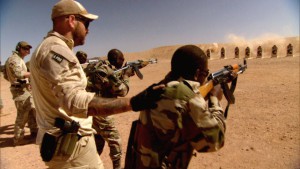 The recent bloody attacks by an affiliate of al-Qaeda in the Maghreb (AQIM) in Burkina Faso, which left at least 28 people dead and 56 wounded, offer further evidence, if any were needed, that the fight against the Islamic State and its confederates ranges well beyond Syria and Iraq.

The six Canadians who were killed – including a family of four – were in the country on a development mission like many of the other victims. Fighters from AQIM’s Saharan affiliate, al-Mourabitoun, claimed responsibility for the attacks, which were targeted at Westerners and United Nations workers. If the new government is looking for an effective and coherent means of contributing to the fight against the Islamic State, AQIM and associated radical groups, one of the options it might consider is to continue its current training, surveillance mission and humanitarian efforts, but also take the fight outside of the Iraq/Syria region.

Notwithstanding periodic and conflicting reports of co-operation and competition between the Islamic State and AQIM, there are indications that these groups are metastasizing into a confederacy of global terrorist actors with broad ambitions. The Islamic State is already active in parts of the Sinai, in Yemen and Libya. Boko Haram has pledged allegiance to the group and there are others in Afghanistan and some of the al-Shabaab in Somalia who have strong connections with the organization.

The objective of the Islamic State certainly appears to be to strengthen the various connections between all these groups, assume the mantle of leadership, and expand from the Atlantic coast of Africa to southeast Asia.

One option the federal government should consider is joining France in support of the security measures being taken by the G5 Sahel member states in the region – Mauritania, Burkina Faso, Niger, Mali and Chad. Such military action would bolster these regional players and the UN stabilization mission in Mali.

Canada is uniquely positioned to make a very valuable contribution in the region with logistical and engineering support, strategic airlift and perhaps some more trainers and special forces. From a diplomatic standpoint, there also needs to be more focus on security co-operation. This would also address some of the foreign policy aims in the Liberal platform, which include doing more in French-speaking Africa and supporting UN peacekeeping missions.

It is vital to confront the Islamic State and its friends wherever they are. Canada could play a key role in the fight in North and West Africa to ensure these groups are prevented from expanding their sphere of activities, and eventually eliminated. As sub-Saharan Africa continues to struggle with the challenges of development, the last thing on earth it needs is a growing threat of terrorism on its doorstep. This serves both African and global security objectives.

Canada is a member in good standing of the Francophonie. By joining the French and African effort, we would definitely demonstrate a new and perhaps even more effective approach to the problem of fighting global terrorism than dropping a few bombs in Syria and Iraq.