You are here: Home / Analysis / Why Burkina Faso is on the precipice of chaos? 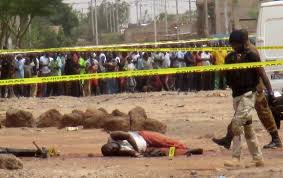 The security situation in Africa’s Sahel region continues to deteriorate. In January 2020, the U.N. envoy to West Africa reported that terrorist attacks have increased fivefold in Burkina Faso, Mali, and Niger since 2016, like reported by counterextremism.com.

In 2019 alone, there were more than 4,000 deaths from terrorist attacks, compared to 770 in 2016. Recently on February 16, gunmen murdered at least 24 people, including a pastor, in an attack on a church during Sunday mass in northwestern Burkina Faso. Despite a steady stream of reports from Human Rights Watch and the World Food Programme, warning of an accelerating humanitarian crisis, efforts by governments, joint military forces, and Western allies have thus far been insufficient.

Despite the growing Islamist threat in the area, the U.S. seems to be sending mixed signals about its commitment to the region. As reported by the New York Times in December 2019, Defense Secretary Mark Esper is mulling moving troops from West Africa to concentrate on challenges from Russia and China. After allies voiced worry over the report, Secretary Esper stated last month that the review of troops in the region would be more of a “rebalancing” and not a “reduction.” Esper’s attempt to assuage fears was followed by the quarterly report on East, North, and West African counterterrorism operations from the inspectors general of the U.S. Department of Defense (DoD), Department of State (DoS), and Agency for International Development (USAID)—the first to be unclassified. It revealed that the United States Africa Command (USAFRICOM) had shifted from a “degrade” strategy to a “contain” strategy in dealing with violent Islamist extremists.

Burkina Faso may be the most threatened of the Sahel countries and is emblematic of conditions across the region, where al-Qaeda- and ISIS-aligned groups are stoking ethnic and religious differences to gain strength and threaten central governments. Prior to 2015, Burkina Faso was considered a relatively secure country and free of Islamist jihadist activity. Five years later, the World Food Programme warned that the country risks becoming the next Syria. In late 2019, USAFRICOM reported that “security in Burkina Faso is deteriorating faster than anywhere else in the Sahel.”

This is particularly worrying for multiple reasons. Due to the relative peace that existed for decades, the Burkinabe government has had little need for forces dedicated to the specific jihadist threat experienced by its neighbors. It is also the poorest country in the region. The military lacks the materiel and training to present a formidable response to the terrorist threat. Though Burkina Faso is part of the G5 Sahel Joint Force and the Sahel Alliance and has the support of former colonial power France’s Operation Barkhane, vast swathes of the country appear ungoverned and communities remain vulnerable. While the violence has been mostly concentrated in the country’s north and east, it threatens the remainder of the country, as well as currently stable Ghana to the south.

Although it is a poor country, Burkina Faso does have a “gold vein” and deposits of other resources. Gold mining accounts for approximately 10 percent of Burkina Faso’s GDP. Should the country slide into chaos, those resources could provide an economic and public relations boon to Islamic extremists. That nightmare scenario came a step closer on November 6, 2019, when Islamist militants attacked a mining company’s bus convoy, killing at least 39 people. The country’s mineral resources, for the sake of Burkina Faso’s future, must be prevented from falling into the hands of extremists.

Finally, with multiple extremist groups—historically al-Qaeda-aligned and now a growing ISIS-linked network—swarming the country’s north and expanding east, Burkina Faso risks becoming the next jihadist hub. The symbiotic relationship between global Islamist networks and local jihadists, like Jama’at Nusrat al-Islam wal Muslimeen (JNIM), can have alarmingly destructive effects. Of the countries and regions where ISIS seeks to infiltrate, Burkina Faso and the Sahel appear the least well-equipped to respond.

To make matters worse, in desperation, the Burkinabe government gave the green light for vigilantes to take up arms. This was a controversial move that has produced unintended consequences for civilians in neighboring Nigeria, which is struggling with the persistent and brutal threat from Boko Haram.

There is some hope, however. France announced in early February 2020 that it would send an additional 600 troops to join the 4,500 already involved in Operation Barkhane. The G5 Sahel Joint Force (FCG5S) and France also agreed to step-up efforts to combat jihadists and coordinate under a new Sahel Coalition. That leaves the rest of the world. The U.S. should consider increasing existing military and financial assistance in order to bolster joint defenses and help communities under pressure from jihadist attacks and recruitment. As the crisis appears to be taking a turn for the worse, now is not the time to “rebalance” forces or resources away from the Sahel.