You are here: Home / Analysis / Why are there more wars in the Middle East than anywhere else? 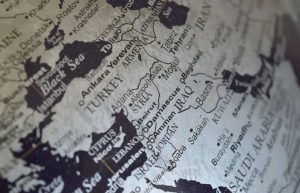 Last night, Turkish airstrikes wreaked havoc in northern Iraq. Hours before the airstrikes, the US launched a secretive “ninja” missile at a car in northwest Syria, killing an alleged member of an Al-Qaeda-linked group. Then, around the same time Turkey’s airstrikes were being launched, Iraqi investigators found a flatbed truck with rockets aimed at a base housing US soldiers near Baghdad, like reported by jpost.com.

There were also Russian airstrikes reported in Idlib on Sunday, June 14.
The huge number of airstrikes and battles taking place in the Middle East make it the most war-torn region in the world, with the largest number of countries and world powers engaged in conflict. Here is a quick rundown of all the wars happening in the Middle East.

Iranian militias vs. the US

Iranian-backed militias in Iraq have carried out dozens of attacks on bases in Iraq where US forces are present. Four members of the US-led coalition have been killed, including one contractor. The US has launched two rounds of airstrikes, in December 2019 and March 2020 against the Kataib Hezbollah faction. The US also killed IRGC head Qasem Soleimani and Kataib Hezbollah leader Abu Mahdi al-Muhandis in January. In response, Iran fired ballistic missiles at US bases. Washington sent air defense systems. The US also has tensions with Iran in the Persian Gulf, where the Islamic Republic mines tankers and harasses American ships. And there are tensions in Syria where Iran threatens US forces. Russian contractors serving with pro-Assad militias in Syria attacked US-backed Syrian Democratic Forces in February 2018 near Deir Ezzor.

Israel vs. Iran and Hezbollah

Israel has carried out more than 1,000 airstrikes in Syria against Iranian targets, according to retired IDF chief of staff Gadi Eisenkot in The New York Times in 2019. Tensions between Israel and Iran are high regarding Iranian entrenchment in Syria. Tehran may be repositioning forces now. Last August, Israel also detected a Hezbollah “killer drone” team near the Golan. In addition, Hezbollah figures have been killed in Syria and one of their cars destroyed by a drone strike they blamed on Israel. Last fall, on September 1, 2019, Hezbollah launched an anti-tank missile at Israel. Iran launched a drone at Israel from Syria in February 2018. Israel has used its air defense to down missiles and rockets fired from Syria. A salvo was fired at Israel in May 2018. In April 2020, Hezbollah cut holes in the security fence in northern Israel.

Turkey intervened in the nine-year Libyan Civil War in November 2019. Now Turkish drones are active and Turkish planes and ships have appeared off the coast. Turkey backs the Government of the National Accord in Tripoli against the Libyan National Army of Khalifa Haftar. Haftar is backed by Egypt, the UAE, France, Russia and others. The LNA tried to capture Tripoli last year but Turkey helped push it back. Now Ankara wants military bases in Libya. Egypt wants a ceasefire. France is angry at Turkey for trying to conduct a grab for energy resources in the Mediterranean and transfer weapons to Libya. Turkey has asked the US to support it in Libya. Russia sent warplanes to Libya to bolster Haftar after he faced setbacks in May.

Iran moved in to Syria around 2012 to help the Assad regime fight Syrian rebels, and Russia intervened in 2015. With their help, Assad retook Aleppo in 2016 and southern Syria in 2018. Then Russia backed the Syrian regime offensives in Idlib, signing a deal with Turkey in September 2018 and another ceasefire in March. Russia and the Syrian regime also grabbed up areas the US withdrew from during a Turkish invasion in October 2019. Turkey has increased its role in Syria since 2016, invading areas around Jarabulus, then Afrin in 2018 and then Tel Abyad in 2019. Now it has sent thousands of tanks and soldiers to Idlib. Russia and Turkey conduct joint patrols on the M4 highway but Russia continues to bomb Syrian rebels.

US vs. Russia and Iran in Syria

The US says it wants to make Syria a Russian “quagmire.” The Trump administration has carried out two rounds of air strikes on the Syrian regime. Meanwhile, Russia and the US have tensions in eastern Syria around Derik and Qamishli where patrols frequently try to run each other off the road. Things are tense. Russia has accused the US of a variety of crimes in Syria, and misinformation seeks to undermine the US role there. Meanwhile, Washington says it wants Iran to leave Syria and has condemned Moscow’s role in the country.

Saudi Arabia, the UAE and others against Iran in Yemen

In 2015 the Houthi rebels in Yemen looked set to take Aden and control the Bab al-Mandab straits. Saudi Arabia intervened with a Gulf Coalition. Alongside the UAE and contractors and others they pushed the Houthi rebels back. Iran moved drones and ballistic missiles to aid the Houthis and began firing them deep into Saudi Arabia. Eventually Iran even carried out a massive drone and cruise missile attack in September 2019 against Saudi oil facilities. Iran’s Houthi allies also carried out dozens of drone attacks.

The whole world has joined the anti-ISIS Coalition led by the US. It has 82 members. These include heavy lifting by the US and some forces from France, the UK and other NATO members. Iran, Russia and Turkey also claim to fight ISIS. Everyone is fighting ISIS but ISIS is still having a small resurgence in Iraq. The US-backed SDF in Syria also holds 10,000 ISIS detainees and fights ISIS sleeper cells. The Coalition trained and mentored more than 200,000 Iraqi soldiers and some 80,000 SDF members. These huge numbers are apparently not quite enough though. ISIS is still fighting.

The US vs. al-Qaeda

The US is still fighting al-Qaeda. In Syria, Libya and Yemen air strikes kill members of the group from time to time. A “ninja sword” bomb used by US drones has sliced up several al-Qaeda members in recent years in Idlib. These extremists operate near the Turkish border. The US operates across borders to hunt down these extremists.

Israel vs. Islamic Jihad and Hamas

Israel and Palestinian Islamic Jihad have seen tensions rise over the last two years. Hamas also embarked on a March of Return in 2018 and carried out protests for a year. In November and December 2019 Israel and Islamic Jihad came to blows. Islamic Jihad leaders have been killed and many of their fighters killed as well. They have launched hundreds of rockets at Israel. Hamas has refrained from joining some of the fighting.

Turkey vs. the PKK

Turkey had a ceasefire with the Kurdistan Workers Party up until 2015. When it broke down Turkey fought a grueling war in Kurdish cities in Turkey. Then Ankara expanded the war, attacking Kurds in northern Iraq and then invading parts of Syria, claiming to be fighting PKK-affiliates. It invaded Afrin in January 2018 and carried out large scale operations in northern Iraq. On June 14 Turkey launched a new operation targeting Yazidi areas of Iraq, claiming there are PKK bases there. Turkey also accuses the US of training PKK-linked groups in Syria.

Egypt has been fighting an ISIS insurgency in Sinai that has led to thousands of casualties. ISIS has carried out numerous atrocities, targeting Christians and mosques. Egypt has used its military to flood Sinai. However, ISIS is not defeated and the war continues.

NO OTHER area in the world has so many complex conflicts. Every day in the Middle East there are airstrikes and threats of war or invasions. The region is an area of competition for global powers, such as Russia and the US. It is also an area where regional powers feel impunity to traffic weapons and send their armies across borders. Nowhere else in the world are there so many states operating across national borders or funding and arming proxies. Drones and new technology are being experimented with and updated in the Middle East. The region has seen ballistic missile strikes at new ranges, drone swarms and the use of air defense such as Iron Dome, Arrow 3 and Patriots to down threats. Jamming and new technology has assisted Turkey in Libya.

In addition, the region’s civil wars in Yemen, Libya and Syria are not ending. They continue. There are also rivalries, such as Qatar versus Saudi Arabia, that feed conflicts elsewhere. Nowhere else in the world are F-35s and MiG-29s and S-400s and other systems all being put into play with the chance that they will all be used. The region is suffering the long-term challenges of the post-Cold War and post-War on Terror era.

This era sees a return to stronger states after the Arab spring, the chaos and the rise of proxy groups and ungoverned spaces. Now this region is seen as up for grabs as the US begins to withdraw from areas like Syria or Afghanistan and other states, such as Iran, Turkey, Russia and China, step in. This feeds conflicts as each country seeks greater hegemony and wants to take over areas in Syria, Libya or Yemen. In addition, terrorist groups and proxy armies and militias are well armed in the Middle East. Although they wreak havoc across the Sahel or Afghanistan, this is the region where they have the most funding and weapons and state support.