You are here: Home / Senza categoria / Why are islamic terrorists targeting schools and universities?

Attacks on educational institutions are on the rise and the motives are varied – from undermining the state to stalling education. 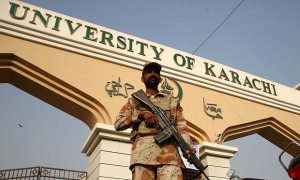 Over the last 13 months there has been a series of extremely bloody attacks on schools, colleges and universities. On Wednesday Taliban suicide bombers mounted an assault in north-western Pakistan; just over a year ago the same movement attacked a school only 30 miles away,killing 150 people, most of them children. In April last year 147 were killed in a massacre at a university in northern Kenya by the Somalia-based al-Shabaab.

Then there are hundreds, possibly thousands, of other incidents of violence directed at educational institutions, teachers or students across the world which have not been reported.

Why would terrorists attack such targets? One obvious answer is because they can. Schools are usually unprotected. Embassies, military bases, even hotels are, after a decade and a half of rolling waves of terrorist violence across the world, now harder to hit.

But there are other reasons, too. Terrorism aims to undermine the legitimacy and authority of a state. In many parts of the world, the local school is that state’s only tangible presence.

Another goal is simply to stall education, of both girls and boys, though the former tends to prompt a greater reaction. In 2012 the Pakistani Taliban tried to kill a 15-year-old schoolgirl, Malala Yousufzai, who went on to become an international icon.

A more pragmatic aim may be to send a message to policymakers or even to the general public.

What is clear is that such attacks are increasing. Data compiled by the University of Maryland in the US shows a dramatic increase in violence directed at schools following the 2004 massacre at a school in Beslan in southern Russia of more than 300 people, including 186 children.

This is easily explained. It is in line with the rise of terrorism more generally over the period. The proportion of attacks on educational institutions overall – between 3% and 5% – has barely changed.

But, again reflecting a more general trend, the attacks are now much more lethal.

According to another recent study by the University of Maryland, “mass-fatality terrorist events” – defined as those in which more than 100 people are killed by terrorists in one country in one day – occurred just over four times a year on average between 1978 and 2013. In 2014, there were 26. In 2015, the number is equivalent or higher, depending on how many of the massacres carried out by Islamic State and Boko Haram, the extremist movement based in north-eastern Nigeria, are counted.

Boko Haram has made targeting schools and students a priority, most infamously abducting 276 schoolgirls in 2014. Nigerian officials say they still have no idea where they are.