You are here: Home / Analysis / Why and how Syria became an area of Iranian control 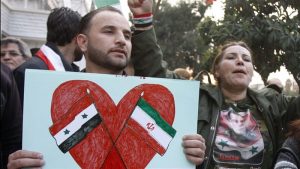 Analysts are sounding the alarm on Iran’s expanding control of territory across war-torn Syria, stretching as far as the Mediterranean Sea, saying the country has exploited the chaos of the Syrian civil war and capitalised on the West’s narrow focus on Islamic State, like reported by sbs.com.au.

“It is important to understand that Syria has become… an area of Iranian control,” Jonathan Schanzer from the Federation for Defense of Democracies, a Washington think tank, told SBS News.

Islamic State were a terrorist group that had to be defeated, he said, but “in its place we are now seeing a trained military along with its proxies, one that seeks the destruction openly of the west, of Israel, sees the end of the United States as a good. This is what’s come into the vacuum.”

This month saw the most significant skirmish to date between Israel and the so-called “Axis of Resistance” – Iran, Syria’s Assad regime and Hezbollah – when Israel shot down an Iranian drone in its airspace on February 10.

It then scrambled eight fighter jets which destroyed the drone’s launch base as well as significant capacity of the Syrian air defences. One of the Israeli planes was successfully downed by Syrian anti-aircraft fire in retaliation.

The incident underscored Iran’s newly entrenched power and reach across the Levant, analysts say, more than three decades after it helped establish Hezbollah in Lebanon and seven years after it first entered the Syrian civil war to help Assad fight Syrian rebels.

Despite fears the incident could spark the worst war the Middle East has seen, on Sunday Israeli Prime Minister Benjamin Netanyahu slammed Tehran for its actions in Syria, waving a piece of metal he said was from the downed drone.

“Through its proxies – Shiite militias in Iraq, the Huthis in Yemen, Hezbollah in Lebanon, Hamas in Gaza – Iran is devouring huge swathes of the Middle East,” he told world leaders at a security conference in Munich on February 18.

“Israel will not allow Iran’s regime to put a noose of terror around our neck. We will act without hesitation to defend ourselves. And we will act if necessary not just against Iran’s proxies that are attacking us, but against Iran itself.”

Netanyahu also repeated his staunch criticisms of the 2015 nuclear deal signed by Iran and world powers, which may be scrapped by the administration of US President Donald Trump. Critics of the deal believe it is “appeasement” of Iran that will not stop it creating a nuclear weapon.

Could this lead to an Israel-Iran conflict?

The drone incident marked a turning point in Israeli strategy for dealing with Iranian provocations, Mr Schanzer said, because it amounted to an open admission the militarily powerful democracy was pushing back, after years of denying involvement in covert retaliations on Iranian targets in Syria.

Mr Schanzer said Iran, with the support of Russia which commands Syrian airspace, has exploited and promoted the chaos of the civil war through proxies and by supporting militias with training and advanced weaponry.

“The control that Iran currently exerts inside Syria is done through several different fighting forces,” he said.

“Hezbollah has sent somewhere between 6000 and 8000 fighters that have helped quell the Sunni Islamic insurgency against the Assad regime. They have not been able to do this alone, they have hundreds of advisers from the Islamic Revolutionary Guard Corps of Iran, the special forces of Iran.

“We have also seen the growth of Shiite militias, some that existed from the time of the Iraq war, but others that have popped up over time that Iran has used to galvanise Shiite support primarily to fight ISIS but also to attack the US and its assets around the Middle East.”

Iranian leaders have openly talked of a goal of creating a corridor that stretches from Iran to the Mediterranean, including Ali Akbar Velayati, a senior adviser to Iran’s Supreme Leader, who has spoken figuratively of a “resistance highway” from Tehran, through Mosul, Damascus and Beirut to the coast, Maysam Behravesh from the Center for Middle Eastern Studies in Sweden told Reuters.

Israel is concerned a permanent Iranian presence in Syria could pose a threat to it like Hezbollah in Lebanon, analyst Ali Rizk from Middle East news website Al Monitor told the New York Times. “It’s like a replication of the Hezbollah model,” he said.