You are here: Home / Mediterranean / Who were the victims of the March of Return? Palestinian ‘victims’ identified as terror org members 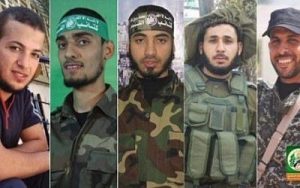 March 30, 2018 — Land Day — was officially welcomed by the “March of Return” events in the Gaza Strip. The riots were preceded by intense preparations on the Gazan side, which included calls by many organizations in the Gaza Strip, both military and civilian, for civilians to come en masse to claim “their right to return to their land that Israel stole from them”, like reported by algemeiner.com.

In preparation for March 30, tents were set up and infrastructure was prepared for receiving the civilians in order to ensure that they would remain in areas close to the border fence up until the target date of May 15 — Nakba Day.

The intense confrontations around the fence continued throughout Friday March 30, and ended with 17 dead and more than 1,000 wounded Palestinians with varying degrees of injury. According to the Palestinian Ministry of Health, these included about 800 wounded by gunshots from Israeli snipers.

Many claims have been voiced since then about Israel’s supposed excessive use of force to suppress the demonstrations along the fence. There were also allegations of Israeli snipers indiscriminately causing harm to civilians.

In the following document, I will present the data on the fatalities as they were recorded in the Palestinian media — by open and public means.

I would like to point out that in the days following March 30, two more fatalities were added to the list, which are included in the document.

Before the data is presented, and for the sake of readers’ convenience, I would like to point out that of the 19 killed there are:

This is a total of 15 persons with actual military identification, and another four whose connection to military activity has not been proven.

I will also note that the failure to find any public connection in the Palestinian media does not mean that these people are not military activists.

Another important factor to consider when examining the identity of the dead and their affiliation is the fact that, out of the 19 killed, it is possible to clearly identify 15 military activists, i.e. around 80% of those killed at a minimum.

The entire Gaza Strip has fewer than 70,000 military operatives, including those of all the various organizations. Gaza has a population of two million — meaning that the percentage of military activists out of the total population is lower than 3.5%.

This high rate among those killed is even more amazing given the fact that they were dressed in civilian clothes and could not be identified in advance as military activists.