You are here: Home / Africa / White widow ‘has killed 400 people’ as key figure in al-Shabaab 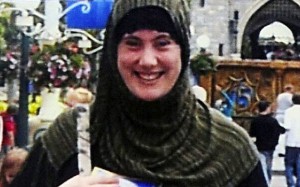 White Widow Samantha Lewthwaite is responsible for the deaths of at least 400 people, including last month’s slaughter of 148 people at a university in Kenya, according to Somali security chiefs.

Samantha Lewthwaite, known as the White Widow, is at the “right hand” of terror leaders in Somali, spy chief says

She is thought to have risen through the ranks of terror organisation al-Shabaab quickly after many of its leaders died in drone attacks and is now at the heart of its deadly mission.

Speaking anonymously to The Mirror, one security chief in Somalia said: “This lady sits at the right hand of the leader directing attacks.”

The British woman, a graduate of London University, is now trusted by bosses including al-Shabaab leader Ahmad Umar to co-ordinate major atrocities, terror raids, suicide attacks and car bombings in Somali and Kenya.

Originally from Aylesbury, Buckinghamshire, she is also believed to be at the forefront of a recruitment drive to encourage youngsters and women to become suicide bombers for cash.

The top officer at Somalia’s National Intelligence and Security Agency – who The Mirror chose not to name to protect his identity – said: “The lady has moved up the ranks. She is one of the most important figures in the terror group.

“We think this lady is sitting at the right hand of the leader directing attacks. She does not carry out attacks herself as she is too important but is responsible for many, many deaths – hundreds. She uses children to kill for her after giving money to their families.”

But he said her reign of terror could be drawing to a close.

“We share all our information with British agents here in Mogadishu. They are here to keep an eye on the lady and other Britons in Somalia….The SAS are ready to get her or we are ready to call in a drone strike against her. We will get her eventually.

“We know she has surrounded herself with other Britons, her own people as her Somali language is not so good. They are her lieutenants and bodyguards.”

Lewthwaite is the widow of one of the London 7/7 suicide bombers, Germaine Lindsay. She fled the country after the attacks and has since been linked to a number of terror plots, including the Westgate mall attack in Nairobi, when al-Shabaab murdered 67 people in 2013.

There are rumours she has changed her looks with surgery. Interpol has issued a Red Notice warrant for her, and security services in 200 countries are hunting for her.