You are here: Home / MidEastGulf / While Nusra vows to eliminate Isis, Syrian forces and Hezbollah fight on in Qalamoun 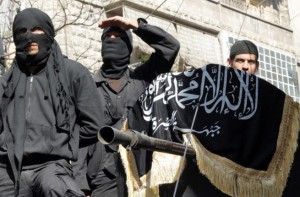 The Nusra Front and its allies in Syria’s Qalamoun region vowed Tuesday to “eradicate” ISIS [Daesh], as Hezbollah and the Syrian army captured new territory from the jihadis, the latest in a series of gains following more than a week of clashes in the border area.

The report came hours after the Twitter accounts of the Nusra Front and the Qalamoun branch of the Army of Conquest, a coalition of jihadi parties led by Nusra, announced that they had been fighting with ISIS in west Qalamoun.

The long statement highlighted that its fighters were against inter-jihadi conflict, especially since the area is surrounded by Hezbollah from the east and the Syrian army from the west.

The statement said that clashes between ISIS and other Syrian rebels in the past had been thwarted because of the existence of ISIS members who showed “loyalty to all Muslims.” But those member were either killed in clashes, exiled or executed by ISIS itself, the statement added.

It said the militants who still belonged to ISIS were either suspects of treason, bandits, or people who “are being exploited [in return] for food and clothes.”

“A decision has been made by the working factions to eradicate this corruptive group because there is no longer any other option, and Allah be the helper,” the statement said.

It also detailed all the actions by ISIS members that the Nusra-led coalition said stirred the conflict.

The statement also told the tale of events that occurred over the last two months that led to the current battles.

It began when ISIS erected a checkpoint on the main road that Syrian rebels used to arrive to the battlefield, prompting the jihadis to take another road to avoid fighting, it explained.

The second road was then shut by ISIS using mounds of soil, which forced Army of Conquest jihadis to take a third road that is exposed to “enemy outposts,” the statement added.

The first clash erupted when ISIS attempted to arrest a jihadi at the checkpoint, and escalated when they positioned themselves on nearby hills and started firing at other fighters.

Meanwhile, the statement explained, pressure by Hezbollah increased in the area, which motivated some ISIS members to join Nusra in the battles. However, another group of ISIS militants imposed a checkpoint to force travelers to pledge allegiance to ISIS, then kidnapped the commander of one jihadi group and his fighters.

The statement said ISIS militants threatened to behead him and all members of his unit, and tortured them by beating them with rifles. At this point, the Army of Conquest’s jihadis rushed in and began the current battle with ISIS.