You are here: Home / West Asia / Where will Islamic State strike next in the Philippines?

One year after the devastating siege of Marawi City, ISIS-aligned militant groups are believed to be recruiting and plotting from the shadows, like reported by atimes.com 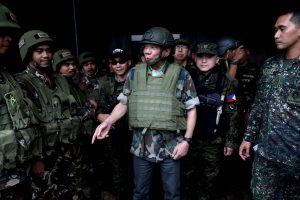 One year after Islamic State-aligned Filipino and foreign militants laid siege to Marawi, the war-torn city has yet to rise from the ashes. With over a score of extremist groups that still pledge allegiance to ISIS lurking in the shadows of the southern island of Mindanao, the restive region is on a knife’s edge in anticipation of a next big attack.

Maute and Abu Sayyaf Group rebels first launched their surprise siege on May 23, 2017, an attack that exposed the Armed Forces of the Philippines’ ill-preparedness for full-scale urban warfare. It took President Rodrigo Duterte’s government five months to liberate the Muslim city from the ragtag militants’ clutches.

Marawi’s central core was left in ruins in a battle that killed some 1,100 people, mostly militants. Over 350,000 civilians were displaced by the battle, more than half of whom remain displaced one year on. It’s a dire situation social media-savvy extremist groups are now exploiting to recruit new members with the lure of money, guns and ideology, analysts and officials say.

Key to the extremist groups’ narrative is the notion that Marawi’s devastation was inflicted mostly by the state, through indiscriminate aerial bombardments and mortar fire they say was intentionally disproportionate to destroy the country’s only Muslim majority city.

The government, which has yet to begin the rehabilitation of the city’s so-called “ground zero” center that remains restricted to civilians, utilized overwhelming air, artillery and ground assets that flattened buildings and residences in an area spanning 250 hectares. The battle’s destruction left behind more than three million tons of debris, according to official estimates.

One year on, analysts say the government’s declared victory at Marawi was far from decisive and that a new, devastating militant assault could be on the cards as ISIS-aligned militants regroup and potentially join forces.

“The threat is real,” says security analyst Rommel Banlaoi, chair of the Manila-based Philippine Institute for Peace, Violence and Terrorism Research. Citing government intelligence reports, he notes that there are at least 23 armed groups based in Mindanao that still pledge allegiance to ISIS, though it’s unclear how many receive direct support from the terror group.

On May 15, in an event organized by the military in cooperation with the Autonomous Region in Muslim Mindanao (ARMM) Development Academy, Banlaoi told assembled soldiers, police and Muslim religious leaders that ISIS elements have deeply penetrated major Mindanao cities and that some are believed to be planning attacks during Islam’s fasting month of Ramadan, which started in the Philippines on May 17.

He claimed that foreign ISIS fighters from Indonesia, Malaysia and even China who cannot return home after the group’s defeat in Syria and Iraq are likely to seek refuge in the southern Philippines.

Maguindanao became known as a haven for Islamic militants when the notorious Malaysian terrorist and bomb-making expert Zulkifli bin Hir alias Marwan was killed there in 2015. He had been coddled by BIFF elements, according to reports.

On May 11, Duterte visited Marawi for the 10th time since the siege to ceremonially receive recovered firearms and distribute assistance to 27 members of the vanquished Maute Group who surrendered to the government.

The mercurial leader asked the city’s residents for patience while calling on other ISIS supporters to come above ground and assist in the city’s peaceful redevelopment.

“Give us time to rebuild, give us time to establish the goodwill,” Duterte said in apparent recognition of the growing animosity towards the state among displaced residents.

He also expressed regret for declaring martial law for the entirety of Mindanao in response to the Marawi siege, a rights-curbing measure that will remain in effect until the end of the year. “I was not very happy with it,” Duterte claimed while in Marawi. “It was a decision most painful to me because I know that lives will be wasted.”

Critics, however, say his reconstruction plans are tone deaf to local sentiments. His government has provisionally chosen a Chinese-led consortium to lead Marawi’s rehabilitation, although its proposal may be challenged by other contractors until the end of May.

The government aims to commence rehabilitation of the city’s “ground zero” in June. The reconstruction is estimated to cost 51 billion pesos (US$1 billion) and will take around three years to complete, according to the government’s plans.

China’s lead role in the reconstruction, however, does not sit well with many residents. Banlaoi, for one, believes that the war in Marawi would not have been won if not for the technical assistance of other nations, particularly the United States. China, to which Duterte has pivoted in pursuit of a rebalanced foreign policy, also supplied firearms to defeat the militants.

Peace advocate Eliseo Mercado Jr, a priest from the Oblates of Mary Immaculate congregation, has consistently and strongly criticized the government for the lack of any development at Marawi’s “ground zero” seven months after the city’s so-called liberation.

“If you don’t allow them to return and rebuild their homes according to their heritage, they will have rebellious hearts,” he said, warning that ISIS-aligned groups will actively exploit to their advantage the government’s neglect of local voices in the rehabilitation process.

Drieza Lininding, chair of the Marawi-based Moro Consensus Group, a community organization, says that the government’s multi-agency task force created to lead the state’s rehabilitation efforts has not yet held any significant public grassroots consultations with locals.

“We welcome all the help and interventions as long as they are socially cohesive and that affected residents are consulted from the planning to the implementation of projects that respect our religious and cultural beliefs,” Lininding says.

Based on a rehabilitation plan presented earlier by the government, reconstruction works will include a new lakeside promenade, economic zone, cultural and convention centers and hotels.

Banlaoi and others, however, have urged the government to restore Marawi to its original form rather than a centrally planned vision that fails to take into account the wishes and aspirations of those who continue to suffer one year after the siege.