You are here: Home / Analysis / Where will Islamic State strike after it collapses in the Middle East? 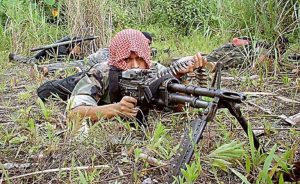 Islamic State will soon cease to exist as a territorial entity in Syria and Iraq. Despite this, ISIS might retain its potential for upsetting the international system and deleting state borders, as it temporarily did in Syria and Iraq. South Asia is the region the group threatens the most, like reported by warisboring.com.

Beyond its presently besieged and doomed core area, ISIS is an international guerilla and terrorist network, united by its jihadist ideology. Its purpose of this network is to transform itself into a vast totalitarian empire.

ISIS has franchises of varying power in a number of countries, but most of them are hopelessly constrained by objective realities of geography and demography. They might keep causing trouble for long periods of time, they even might grow stronger for a while, but they can never become cores of a truly expansionist geopolitical entity.

A necessary requirement for such a core is to support a large Sunni population. Most of the Sunni Muslims do not support ISIS, but at the same time they constitute the only demographic group where ISIS possibly can recruit supporters.

As the Bolsheviks demonstrated in Russia — or, indeed, as ISIS itself showed in 2014 — a totalitarian regime can be imposed on the majority of the people by a violent, dedicated and well-organized minority.

Once such regime has taken over a given area, it employs brutal repression and mass indoctrination to control the population. It then exploits the population through taxation and military recruitment in order to sustain the regime’s external war effort.

Another requirement for the jihadists’ potential geopolitical core is that it needs to have a space for expansion. Even a successful jihadist group won’t have a great impact if realities of geography restrict it to a single limited area. Sooner or later, its foes will regroup and smash such isolated jihadist franchise.

Sinai Peninsula – the home of the ISIS-affiliated Sinai Province group – is an example of such a place that does not promise a bright future for the jihadists there. Other examples include Somalia, Yemen and Libya.

Perhaps the most grotesque case is in The Philippines. There, an ISIS-affiliated group is fighting government forces on an island of an archipelago nation with a majority non-Muslim population. These jihadists may bring misery to certain parts of The Philippines, but from the perspective of their global ambitions the insurgency in that cut off area is pointless.

The Fertile Crescent is, of course, another matter entirely. The region is one of the cradles of civilization, and includes the two capitals of the medieval Arab Caliphate – Damascus and Baghdad. It also has large Sunni population that was disrupted by the civil war in Syria and disgruntled by the Shia dominance in Iraq.

In addition, the Fertile Crescent has geographic access to some of other Sunni areas. All of this summed up to proper staging ground for launching a totalitarian imperial project the jihadists dream about.

These factors gave the ISIS blitzkrieg of 2014 greater geopolitical significance than any other jihadist success has had before or since. That’s why the response to ISIS’s expansion was vigorous, even to the extent of temporarily aligning the American and Iranian actions in Iraq.

Since ISIS insists on being everyone’s mortal enemy, everyone is compelled to be the enemy of ISIS. A large portion of the world’s significant powers took action against the “caliphate” at one point or another, in addition to all local factions in both Syria and Iraq. As a consequence, the de facto ISIS state in the Fertile Crescent area is now nearing the end of its existence.

There’s another part of the world, however, where Daesh has potential for making gains of grave geopolitical import – the northern part of South Asia. The Sunni areas of this region, primarily in Pakistan, have as rich a history as the Fertile Crescent – both as a cradle of civilization and as a former Muslim imperial core. And their population is vastly larger.

Very significant portions of this enormous population are not modernized either in their living conditions or in their worldview. At some point, they might turn out vulnerable to the ISIS subversion and propaganda.

Afghanistan is being consumed by internal war, which is not ending anytime soon. In Pakistan, relatively secular elites mostly maintain control, but even within these elites there is no consensus regarding the nation’s attitude towards radical Islamist organizations. The country’s society constitutes a complex mix, which includes large elements that are deeply conservative, poor and illiterate.

Crucially, Pakistan is not exceedingly stable politically. Any serious unrest could provide the jihadists with an opening to exploit. Meanwhile, Kashmir is in a permanent state of insurgency against India – on the basis of its Muslim identity.

These are significant vulnerabilities. And ISIS is already establishing itself in the region. Its franchise, called Khorasan Province, managed to take over territorial control over parts of eastern Afghanistan in 2015. Since then it has turned the War in Afghanistan into a three-sided affair, adding itself to the country’s government and the Taliban. The Khorasan Province also has insurgents within Pakistan, and is actively recruiting in both Bangladesh and India.

Demographic realities of northern South Asia mean that if the local ISIS affiliates were to take over considerable territory, they could potentially get control over much larger population than ISIS did in Syria-Iraq. Since larger population under the jihadist control gives them greater resources due to taxation and military drafting, a South Asian ISIS entity could be even more dangerous than the one that is presently being destroyed in the Fertile Crescent region.

It is difficult to predict what exactly will be the fate of ISIS’s international network once the caliphate in Syria-Iraq finally ceases to exist. Maybe the organization’s legitimacy will be shaken in the eyes of the global jihadist community.

Or maybe this international network will continue its activities in a robust manner, but nevertheless fails to achieve significant success in South Asia. Such scenarios are plausible. However, because of this region’s vulnerabilities, less optimistic futures are plausible, as well. The threat is real.