You are here: Home / Senza categoria / Where is the Islamic State’s oil going? 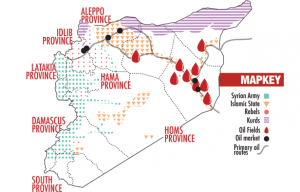 Moscow says it’s Ankara that is in business with the Islamic State, with Turkish President Recep Tayyip Erdogan’s son himself buying cheap oil from the jihadists and selling it on the black market. Washington says that it’s the Syrian regime that technically depends on the oil pumped by ISIS. US Treasury Department official Adam Szubin said militants were selling as much as $40 million of oil a month at the installations which is then trucked across the battlefields of the Syrian civil war and sometimes further.

How the Islamic State extracts Syrian oil and sells it on the black market to fund its jihadist endeavors is no Russian secret. Studiesreleased early this year show that more six months after the Islamic State took over Mosul the jihadists had control of almost all the Syrian oil fields and were making money by selling crude in Iraq, Turkey and Syria.

How important is the oil?

It’s difficult to get precise numbers and percentages from a war zone like Syria, analysts say, but most researchers agree that most of ISIS’s revenue comes from taxation and from the oil it is selling from Deir Ezzor. Over half of the Islamic State’s funding comes from taxation of economic activity and basic services in areas under its control, according to a recent report released by the IHS Inc. intelligence company. The document also states that the monthly revenue of the group totals $80 million. Its business model is largely focused on intermediaries: the militants don’t sell or buy directly; they prefer to take a cut of the trader/smuggler’s profit. Usually this figure is 20% of all services in the territory it controls: electricity, mobile phone networks, internet access, retail, industry and agriculture. Around 43% of its income comes from oil trade.

Jihad Yazigi, editor-in-chief of economic magazine Syria Report, told NOW that the Islamic State relies on intermediaries even when it comes to oil. “They extract the oil and sell it to traders who distribute it mostly inside Syria, both regime-controlled and opposition-controlled territory,” he said. “The Syrian regime doesn’t buy directly from the Islamic State, so technically one cannot say that there is a direct agreement in terms of oil.”

ISIS controls most of the oil fields formerly operated by Shell and Total in Deir Ezzor. Prior to the uprising, when production was at its peak, the Syrian regime produced 200,000 barrels a day, mostly for domestic economy needs. ISIS is able to extract between 40,000 and 50,000, Yazigi said. The militants do not transport and sell oil as the Russian officials have suggested with aerial footage of trucks crossing the border into Turkey.

Most of the oil fields controlled by ISIS were in the portfolio of Al-Furat Petroleum Company, an affiliate of Royal Dutch Shell. The oil in these fields is low in sulfur and can be easily processed in makeshift refineries in ISIS-controlled territory. Part of this oil is also used to secure local tribal support. “[ISIS] allows Bedouins in Deir Ezzor Province to tap wells, such as the Bar al Milh, Al-Kharata, Amra, Okash, Wadi Jureib, Safeeh, Fahda and other extraction assets near Jebel Bushra. At least nine major tribes have benefited from similar regional-friendly schemes, including Iraqi ones, such as the influential Jabour tribe. As a rule of thumb, a large trailer carrying 30,000 liters of crude can make $4,000 profit in just one journey lasting a few days. The result of this policy is soaring support for the caliphate,” reports show.

According to experts, ISIS militants sell the oil they extract directly at the oil field to intermediaries who in turn take it to various markets in Syria — in both government and rebel-controlled areas — Iraq and Turkey. “ISIS also does not seem to have any direct agreement in terms of oil with either the regime or the Turks,” Yazigi said. “It’s the traders who transport the oil to different places. Most of the oil is traded within Syria. A very small quantity is going to Iraq or to Turkey.”

Yazigi also says, though, that the gas trade is a different matter. “You can’t put the gas in tankers — you need a pipeline to transport it. In a way, the government itself admitted that it is buying gas from ISIS. The minister of oil recently said that the increased electricity blackouts in Damascus are due to the shortage in production at the Coneco gas plant, which is under ISIS’s control. They said it was because the ‘terrorists destroyed it;’ but, of course it’s the coalition that bombed. It is an admission that they are buying gas from this plant which is controlled by ISIS.” Moreover, Yazigi says the minister also insisted that his ministry’s priority is to ensure the safety of the pipeline that brings oil from the northeastern fields controlled by the Kurds to the Homs refinery. These oil fields are not under ISIS’s control, but the pipeline crosses ISIS territory remains operational only with some form of ISIS approval. Yazigi says this is an indication that there is a form of agreement between the Syrian regime and the Islamic State.

What the airstrikes have accomplished

According to Yazigi, US-led coalition strikes over the past two weeks have damaged the militants’ refining capabilities and the infrastructure used to transport crude across Syria. One problem the coalition is facing is that while striking the oil wells directly could curb ISIS extraction, doing so might also cause permanent damage.

According to energy experts, Syria’s oil accounted for just 0.5% of global production in 2010, at its peak. Samer Abboud, associate professor of historical and political studies at Arcadia University, says that this is the main reason the international community did not really foresee the importance of these oil reserves and the impact they would have if taken over by a group like ISIS. Most chanceries panicked in June 2014 when ISIS took Mosul and was marching towards Kirkuk, because Kirkuk hosts the largest oil reserve in the world.

“I think the quantity of oil that Syria has is exaggerated,” Abboud said. “The only way to really make money is to take cuts from everybody else that deals with oil. They don’t have the capacity to refine it — they have to collect the money from all sorts of intermediaries. All this talk about a nefarious collusion between countries and groups — between the regime in ISIS; between Turkey and ISIS… It looks like that, but it’s not like they’re sitting in a control room deciding, ‘you get this, I get that.’ It’s happening but it’s very organic, based on what’s happening in the war, and I don’t think that it’s all purposeful. The ISIS main points of contact with the Syrian oil are to control its extraction and tax it on the way out.” And the taxes the Islamic State collects, he says, are difficult to target.