You are here: Home / Europe / Where is Putin leading the Middle East? 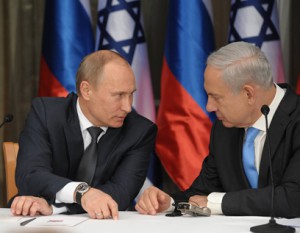 Prime Minister Benjamin Netanyahu’s visit to Moscow on Monday will be held on the backdrop of a significant increase in the Russian military presence in Syria.

The Russian move is aimed at saving the Bashar Assad regime from a collapse – Russia appears to be the only world power supporting the Syrian president’s survival unconditionally – although it is still unclear how it plans to achieve this goal. Through extensive guidance of new recruits in the dwindling ranks of the Syrian army? By arming the Iranian army and Hezbollah units with upgraded weapons? Where is President Vladimir Putin leading the Middle East?

Netanyahu will likely be briefed on Putin’s intentions during his visit and will present Israel’s policy and its demands for an agreement on Syria’s future to the Russian president. Both Israel and Russia believe that Iran and Hezbollah together are incapable of saving the Assad regime despite their direct and prolonged involvement in the fighting. Their weakness stands out in light of their joint failure and raises doubts in Russia in terms of their quality as allies on the ground.

Israel, for its part, has shown its determination not to allow Iranian and Hezbollah activity in the Golan Heights, and this aspect has surely not escaped Putin’s eyes and he must take it into account when outlining his policy in Syria.

Alongside Netanyahu’s visit to Moscow, we are seeing the world powers scampering between the United States and Russia. After Moscow’s opening shot, Washington began working on its own response – it has been involved for a while now in air strikes against the Islamic State in an airspace close to Russia, in addition to the wider strategic aspect of the ancient battle between the two powers over areas of influence in the Middle East.

There is a desire on both sides to prevent a deterioration, hence the decision to establish immediate security-ties which may expand to comprehensive negotiations on Syria’s future, including the issue of the Iranian presence on its territory. It’s possible that encouraging the US to enter strategic negotiations for an overall solution for Syria was the real objective of the Russian maneuver. American Secretary of State John Kerry is implying that his country is willing to take this route, and Israel has a clear interest in it.

Putin’s handling of external crises indicates that he makes plans step by step, while maintaining options for quick changes in a direction dictated by unexpected events on the ground.

In 2013, when the Syrians began using chemical weapons in the civil war, US President Barack Obama was required to honor his commitment that he would view as a “red line” being crossed. While calculating his steps, Putin published an article in the New York Times, in which he ruled that the crime had been committed by opposition elements. He also added that there was information that they would use this weapon against Israel in the future.

Obama began deploying strategic weapons in a bid to bomb the chemical weapon arsenal, and within a short period of time Putin changed his mind and initiated together with Obama a move of removing the weapons from Assad, under international supervision. In the meantime, the threat to Israel – which turned out to be a disinformative move – was forgotten.

Putin is keeping his cards, beyond the goal of saving Assad the person, close to his chest. He will definitely want to understand Israel’s expectations, which he cannot ignore.

Washington will also be following the meeting and its results, in order to understand where the prime minister is headed. Will he only engage in the immediate – the upgrade of the Russian weapons given to the Syrians, Iranians and Hezbollah and maintaining Israel’s qualitative advantage in every situation? Will he position Israel as an active and strong player whose strategic needs must be taken into account, especially in regards to Iran? a neutral player between the battling world powers in the Middle East.

The Israeli-American alliance goes two ways, and when the upgrade of the qualitative advantage Israel requires in terms of weapons and strategic needs is discussed in the White House during the Obama-Netanyahu meeting in November, there must be no doubt regarding Israel’s commitment to its ally. When it comes to Syria, it will be important that the US takes care of Israel, just like Russia is taking care of Iran.

The Moscow meeting may affect the way the prime minister is received in Washington – as an ally or as a client. And let’s remember that Putin appreciates and respects a strong Israel.