You are here: Home / Mediterranean / Where did all of Libya’s ISIL militants go? 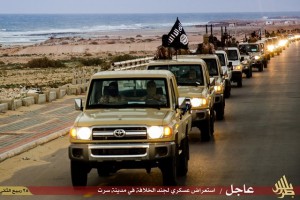 The guns have fallen silent after Libyan forces captured the coastal town of Sirte from ISIL earlier this month, but the question remains – where did the militants go?

So far, less than 500 fighters have been accounted for – the bulk of them dead – since the ruined town fell on December 6.

Yet in June this year, CIA director John Brennan told the US congress that ISIL had between 5,000 and 8,000 fighters in Libya.

Three months later, French defence minister Jean-Yves Le Drian warned that the fall of Sirte, the ISIL headquarters in Libya, would bring with it the risk that militants would flee to other parts of Libya.

“We should begin to look seriously at the question of the spread of the terrorists once Sirte is emptied (conquered),” he said. “They don’t disappear, there’s a new risk that appears.”

ISIL arrived in Libya in August 2014 and took advantage of the chaos in the country to gain a foothold in several areas, including establishing a 250-kilometre self-declared “caliphate” around Sirte.

In February last year, the group filmed the execution of 21 Christians, 20 of them Egyptians, lined up on the Sirte shore in orange jumpsuits for ceremonial beheadings.

France has helped lead the fightback against the extremists in Libya, and agreed in July last year to take the lead in anti-ISIL operations in North Africa, with the US already engaged against the militants in Iraq and Syria.

A total of 3,000 French troops are stationed in Niger on Libya’s southern border, attacking militant convoys as they cross in and out of Libya.

In May of this year, units from the northwestern city of Misurata, the largest militia allied to the new UN-backed Government of National Accord (GNA), began their offensive against ISIL in Sirte.

By mid-June, the Misuratans had overrun most of the territory ISIL had controlled around Sirte, with the militants holding only the town itself.

Then on August 1, US jets began a bombing campaign to support the offensive in Sirte, with more than 400 air strikes hitting ISIL positions.

The last buildings belonging to ISIL fell on December 6, with two female suicide bombers rushing out to detonate themselves near advancing troops.

Since then, Libyan forces have been searching for any dead or alive ISIL fighters in the town, with media reports saying that more than 400 militant bodies have so far been found and about 20 prisoners taken.

Meanwhile, Ibrahim Baitulmal, head of Misurata’s military council, estimated that 1,700 bodies of extremists had been recovered during the campaign, adding that the total number killed would have been higher since the militants retrieved some of their own dead.

But one Libyan fighter in a Misuratan unit, speaking on condition of anonymity, said that until quite late in the Sirte campaign, the perimeter around ISIL positions was loose, giving many opportunities for militants to escape the town.

In late October the head of the west Libyan branch of ISIL, Abu Hudhayfah Al Muhajir, admitted that most ISIL fighters had already left the town.

“Most of our people in Sirte have moved to neighbouring areas six months ago – and are still moving – during which they experienced the worst,” he told Al Naba, an ISIL newsletter.

He acknowledged that the group had suffered in Libya but said it would continue its campaign for “conquest and empowerment” and was still attracting a steady flow of foreign fighters.

“The mujaheddin in the Libyan provinces are still well … Their security detachments are still spread in all the cities and the areas, and their brigades move in the east and west of the desert.”

Now, the hunt for ISIL’s missing fighters has begun, with many believed to have vanished into Libya’s vast desert interior. Leaders of the western town of Beni Walid have complained of ISIL units setting up camp nearby and appealed to the GNA for help in safeguarding the town.

Diplomats say that since the summer, ISIL units have also been detected in the desert outside the southwestern town of Sebha, using routes leading to the Algerian and Niger borders. Some ISIL units are also in southern Benghazi, besieged by the Libyan National Army which is loyal to the House of Representatives parliament – an administration rivalling the GNA.

But as long as Libya remains split between two rival administrations, the Tripoli-based GNA, and the House of Representatives, which is based in the eastern town of Tobruk, ISIL may be able to take advantage of the chaos to reestablish itself.

The French defence minister, Mr Le Drian, warned in September that ISIL will be eradicated from Libya only “if the Libyans themselves secure real political and military coherence”.