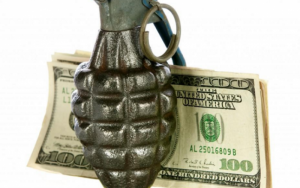 This month marks the second anniversary of the deadly attacks in Paris, when terrorists Said and Cherif Kouachi attacked the Charlie Hebdo satirical magazine on January 7, 2015 and when Amedy Coulibaly, a friend of the Kouachi brothers gunned down innocent grocery shoppers and held 15 others hostage in the Hyper Cacher attack. Together, the three had amassed an arsenal of weapons worth €25,000. These included rifles, rocket launchers, grenades, and tear gas canisters.

The story of the terrorist attacks has been well publicized around the world; but the method the perpetrators used to finance their weapons is less known. How did these terrorists pay for their weapons?

According to Next Inpact News and Euipo, a report published by the French Union of Manufacturers (UNIFAB) on Counterfeiting and Terrorism, “counterfeiting is now a preferred mode of financing of terrorist groups, which organize the production and distribution of fake products to power their operations”.

In the Kouachi case, Cherif Kouachi bought €8,000 of counterfeit items, mostly consisting of Nike shoes that he procured from China via Western Union and sold in France online. Articles also mention that the terrorists were involved in selling drugs online before they sold counterfeit goods.

This chain of funding shows a clear correlation between transaction laundering and terrorism, using legitimate marketplaces to conduct illegal activity (in this case, selling counterfeit shoes) and then using the proceeds to launder money for terrorists.

Transaction laundering is the action whereby one ecommerce merchant processes payment card transactions on behalf of another merchant. However, today’s transaction launderers are not just transferring money from one merchant to another. They often use authorized ecommerce websites as fronts for an entire network of unregistered, unreported, and often unlawful lines of businesses, for example, narcotics or illegal pharmaceuticals, child pornography, sales of counterfeit goods, or weapons.

According to the FATF report, “Emerging Terrorist Financing Risks“, electronic, online and new payment methods are gaining popularity, as they can be accessed globally to transfer funds quickly. As the word ‘laundering’ implies, transaction laundering (TL) and money laundering (ML) are interrelated. In TL, the washing ‘machine’ is a virtual one — the cyber, ecommerce world itself. Criminals can easily set up websites, through which they sell high value items such as diamonds, and then process payments from these sites by routing them to legitimate, registered online stores (i.e. marketplaces, restaurants, supermarkets, toy stores, etc.)  In other cases, criminals who conduct TL, sell illegal goods on credible, global marketplaces, as described in the case above.

Our research shows that 508,632 sites were found to include merchants selling illegal goods. And out of the more than 500K sites, available on the open web for suitable purchasers to peruse, approximately 90K were found to be selling firearms.

It is important to note that part of the difficulty in detecting TL is that the activity takes place using valid, legal payment systems. International transfers and operations through currency providers are on the rise. Therefore, anti-money laundering officials and institutions need to shift the focus of traditional cases of fraud– through stolen credit cards or the physical transfer of money (traditional ML)– to theproliferation of TL–the new, digital ML.

Resources and attention need to be allocated to raising awareness of this huge risk as well as to providing actual tools to prevent TL. This elevates the need for effective and continuous monitoring of merchants and micro merchants on marketplaces to prevent not only online violations but also to help assist in the worldwide fight against money laundering, TL and criminal activity.