You are here: Home / FakeNews / When nothing is true and everything is possible 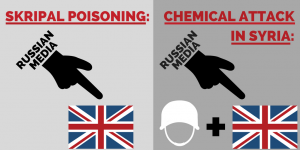 The last couple of weeks, we have seen two major campaigns unfold within the pro-Kremlin disinformation machinery: the disinformation surrounding the poisoning of the Skripals, where the number of narratives spread about it from pro-Kremlin sources is now 31 (!); and the massive campaign targeting the latest chemical attack in Syria, like reported by euvsdisinfo.eu.

The disinformation campaign focused on the Skripal case has many similarities with the disinformation rolled out immediately following the downing of the civilian flight MH17, whereas the campaign targeting Syria is a predictable repetition of previous campaigns discrediting the suffering of civilians in the country.

We have already written about the actors behind and the narratives and tactics used in these virtual tsunamis of disinformation.

Lately these two campaigns, targeting separated events, have started to merge into one another within the pro-Kremlin disinformation space. For an untrained eye, that might seem surprising. But as the book about modern Russia and the TV landscape by Peter Pomerantsev suggests, when nothing is true, everything is possible.

Whereas previously, the White Helmets have been blamed for staging the chemical attacks in Syria among other things, this week we see that the UK is being accused of instructing them to do so. Russian state TV also claimed that Syria’s chemical weapons were actually created by the Brits, although another state TV program claimed that there are in fact no chemical weapons in Syria.

And, prior to the arrival of the independent investigators from the Organisation for the Prohibition of Chemical Weapons (OPCW) to Douma, Kremlin representatives and pro-Kremlin outlets have discredited their work in the Skripal-case.

And once more “news shows” on Russian state TV showed how they are very different from news programs that adhere to journalistic standards. In order to “prove” that the White Helmets had staged the chemical attack in Douma, they aired footage from a film set showing just that. But the problem is that the imagery is easily detectable as coming from the (pro-Syrian regime) movie ‘Revolution Man’. Bellingcat has the full story.

This is not the first time that Russian state TV uses images from productions and claim it is reality – we have seen this happen before with images from computer games being presented as ’irrefutable proof’.

So, even though at a first glance the poisoning of an ex-spy in London and another chemical weapons attack killing civilians in Syria don’t have so much in common, you just need to follow the disinformation trail to find how it all plays a part in the pro-Kremlin disinformation machinery. And how that machinery is used as a non-military means to reach political goals, as described in several great studies included in our Reading list for example here, here, and here.