You are here: Home / Mediterranean / When ISIS lives next door: Tunisia’s desperate fight against extremism 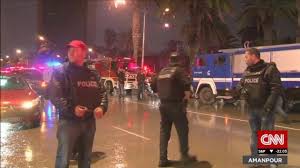 Their lives begin where the paved road ends. Getting there is a jarring ride along a dirt road that passes through small, dry canyons. The land is these people’s most precious possession — second only to life itself.

But they’re now faced with a new and terrible reality — the worst kind of neighbors have moved in.

“My sons refuse to move from this place because this is their father’s land,” said Zahara Ghorballi. “If we move from here the terrorists will take it.” The terrorists she speaks of have already done their worst to her.

In November, her youngest son was snatched. The 16-year-old shepherd was grazing his flock of sheep on the side of the mountain that looms over their lonely home in the sparsely populated valley below.

As if their lives weren’t difficult enough, ISIS militants now roam the hills — and seemed to come out of nowhere that fateful day. They asked her son to hand over his flock. It’s the family’s main source of livelihood and so he refused. ISIS retaliated.

His mother had no idea what was happening until her son, Braik, did not return home with his cousin one day. His cousin had the family’s sheep and was holding a plastic bag.

“I said ‘What is in the plastic bag?’ He told me there is a dead sheep in it. I asked him to give it to me. And he refused. He ran away with it,” Zahara said.

The reason was sinister and horrifying.

Inside the plastic bag was Braik’s severed head. ISIS militants had beheaded him.

Zahara’s remaining sons put their brother’s head in a refrigerator until they could get the body down from the mountain for a proper burial.

“They beheaded him and the sheep at the same time,” she said, “He was everything to me.”

Braik helped her do everything in the house because her eyesight is failing. Now he’s gone. The night it happened she spent pacing, wailing and hitting herself in the head, consumed by grief.

Before they killed him, the militants made Braik spew propaganda in a video. Their chilling message: This is what happens to spies who tell police where ISIS is hiding.

But his family says the reality is the militants are no better than common thieves and just wanted his sheep.

“I want to get rid of all of them. Look for them one by one. Because they hurt me so deeply,” Zahara said.

But that’s easier said than done.

Extremist groups, like ISIS, have gained a foothold in Tunisia in the turbulent power vacuum created after the fall of the old dictatorial regime of President Zine El Abidine Ben Ali and before the formation of a new democratic government three years later.

“They used that margin of freedom to organize and establish their networks. There were groups affiliated with Al Qaeda and Ansar al Sharia, that set up shop all around the country under the guise of (religion),” Oussama Romdhani, Editor-in-Chief of newly-formed newspaper The Arab Weekly said.

Eventually ISIS started to penetrate the hearts and minds of some of Tunisia’s suffering population.

Attacks on the rise

In 2015 alone, the country experienced three major terrorist attacks. The most recent coming in November, when a suicide bomber blew himself up killing 12 members of the Tunisian presidential guard. The country responded with a month-long state of emergency and a curfew.

In June, terrorists targeted and killed more 38 international tourists on the picturesque beaches of Sousse, some 140km (86 miles) south of the capital, Tunis.

And in March, extremists attacked the popular Bardo National Museum, taking hostages for three hours before killing 20 people, 17 of whom were tourists.

The country’s biggest security concern at the moment is its border with Libya, another country that erupted in revolt against its dictator Moammar Gadhafi.

“Libya has basically become an open-air weapons depot. It developed into not only a harbor but also a training ground and a transit point for jihadists,” Romdhani said.

But the flow of jihadists isn’t just one way. The government and a private security intelligence gathering group estimated Tunisia has the most foreign fighters going off to join ISIS. They estimate that some 3,000 Tunisian nationals and rising have crossed into Libya since the fall of Ben Ali’s regime to train with extremist groups — and some return to wreak havoc in their own country.

“We came to the conclusion that the real danger is coming from Libya because there’s no state in Libya. There’s chaos instead. Many terrorist groups and members of those groups go to Libya, get trained there, and then they come to Tunisia to perpetrate attacks,” Director of Communications for the Tunisian Interior Ministry, Lougini Walid told CNN.

And the country has not been slow to react to the threat.

Since the Bardo Museum attack in March, Tunisian security forces have arrested more than 1,000 people during 21,000 raids, according to Walid, and they also discovered a large storage space filled with heavy weapons and explosives.

As for Tunisia’s trouble with its porous border with Libya, he said: “We are building a fence. It is almost finished.”

But he knows fences can do little to offset the hopelessness and poverty felt by many due to a lack of jobs and a stalled economy — and this hardship is helping to feed the extremists’ cause.

Birthplace of the Arab Spring

No one knows that more than Radhia Bouazizi. Her last name is synonymous with the revolution of 2011. It was her nephew Mohamed Bouazizi who essentially started it all.

Mohammed was a fruit seller whose last desperate act sparked protests that eventually turned into what the world now refers to as the “Arab Spring.”

Bouazizi set himself on fire after a government inspector seized his produce cart and, some witnesses say, slapped him. It was his only means of income.

Radhia was close to Mohamed. She said he dreamed of owning a car one day so he didn’t have to pull the cart. Those humble dreams never came true. His burns were too severely and he died. His body is now buried in his family plot outside of Sidi Bouzid, a previously unknown town that shot into the world’s glare.

It was Mohamed’s reaction to government seizure of his wares that sent shock waves around the country and ignited the underlying frustrations of its citizens. They’d had enough of Ben Ali’s 23-year reign.

Four years after the revolution, a huge banner with his picture and the scales of justice hang for all to see on a government building in the town. But all is not well here. Post-revolution, the job market has suffered with Tunisia’s economy in crisis.

“We know our economy was hit after the revolution. But we in Tunisia can also rely on our partnership with our friends and brothers abroad who are also concerned with Daesh (ISIS),” Walid of the Tunisian interior ministry explained. “This is why Tunisia is part of the international coalition of 17 countries against Daesh.”

“It’s like a chain, to have the economic investment we have to have the security. And the big problem today is security and terrorism. Our big challenge is to find or create jobs for these youth. And to create these jobs we need investment in the economy,” he said.

And it isn’t just the youth suffering through hard times economically.

On a beautiful sunny day in a district that offers some of the most picturesque views of Tunis, shopkeepers stand at their doors waiting for customers. But they’ve stopped coming.

Belhassen Al Arabi runs a shop filled with carpets, ornate handmade Tunisian pottery and dreamy arabesque paintings. The 500-year-old building is in the stunning suburb of Sidi Bou Said, where Tunisia’s famous blue doors are impossible to ignore. They’re especially easy to see now because there are no people crowding down the streets past them.

“I want to say: Americans, you are welcome. French, Russian, British people, you are all welcome to come to my country. We need your support,” he said. “But I understand the fear. Even as a Tunisian I am scared.”

He remembers when hordes of tourists would come in from huge cruise ships year round. He continues to hope they’ll return next year. The country as a whole hopes so too. In 2014, tourism contributed about 15% of Tunisia’s GDP, according to the World Travel and Tourism Council.

While Tunisia boasts a stunningly beautiful coastline and incredible architecture, it also has something else to boast about: It has continued to push toward democracy despite all its troubles and challenges.

And that has culminated in a group of Tunisians who helped make that happen being awarded this year’s Nobel Peace Prize.

“It’s a symbol of a hard-earned status to be proud of,” The Arab Weekly’s Romdhani said. But he warned the country has to deliver more security and jobs for its citizens for this fragile democracy to prosper.