You are here: Home / Senza categoria / When city centres turn into battlefields… 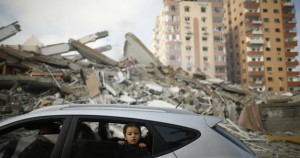 For centuries, wars were predominantly fought across vast battlefields, pitting thousands of men, large army corps and heavy weaponry against each other in open fields. Today’s armed conflicts look quite different: city centres and residential areas have become the battlefields of our time: from Aleppo to Donetsk, from Gaza to Mogadishu, from Aden to Tripoli, wars have moved into the lives, cities and homes of ordinary people more dominantly than ever before. An estimated 50 million people live in urban areas, where conflict affects their daily lives.

Logic dictates that where there are more people and more lethal weapons, there are more victims. Recent data shows that an overwhelming 92% of people killed or injured by explosive weapons in populated areas are civilians.

Beyond killing and maiming, warfare in cities destroys infrastructure and paralyzes essential services with much more impact, making life even harder for those who do survive. Electricity and water supply systems are frequently affected. Direct attacks or the indirect impact of war on hospitals and schools, despite their specific protection under international law, contribute to the implosion of basic infrastructure. Decades of development, construction and investment are lost this way in no time.

Cities tend to be representations of societies: diversity and inequality find their extremes in urban settings. Yet, when war is added onto pre-existing inequalities, high levels of poverty or even disaster, urban fragility increases exponentially, making it harder to absorb the shocks of warfare. Investment into such settings is therefore crucial, to create minimum stability and support lives and livelihoods of people. Such efforts can facilitate peace agreements and the re-building of infrastructure.

While the nature of warfare is changing and wars are moving into cities, they are also becoming longer and their consequences more impactful. Protracted armed conflicts now make up the majority of conflicts around the world. And as conflicts go on for years or decades, wiping out essential infrastructure and reducing food supplies and services to dust, scores of civilians are forced to survive on humanitarian aid, or flee their homes: Fragility turns into fatality.

The International Committee of the Red Cross (ICRC) finds itself in the midst of this dilemma: how to provide essential basics for the survival of people, in the midst of urban war-zones, with no solution to the conflict in sight.

Humanitarian assistance, once conceived as a short-term relief effort, is increasingly the only substitute for long-term development work in protracted armed conflicts. The ICRC fixes and installs water supply structures, where war has obliterated them; we support health infrastructure like hospitals and orthopaedic centres, we train locals to develop skills and not rely on foreign experts; and we help people kick start sustainable small businesses through cash grants.

In short, we adapt to the long-term humanitarian needs that protracted conflicts create, particularly in urban settings. But this means that international donors must adapt too: Additional funding for the long-term work of the few humanitarian actors present in war-zones is crucial to ensure the basic minimum needed for the survival of people.

At the same time, we need to foresee, and prevent, development losses. Even if the resilience of people, infrastructure and communities can go a long way, it will never be enough in the face of armed conflict and violence. International Humanitarian Law (IHL) and the Geneva Conventions codify the limits of war: civilians must be spared, military operations are subject to precaution and proportionality, neutral and impartial humanitarian organizations must be allowed to access civilians – a major challenge in urban, densely populated areas. Too often, the suffering we see in bombed out cities, where people are forced to eat grass and drink filthy water just to survive, is the direct result of the violation of these fundamental principles.

The fragility created by protracted conflicts, resulting in destroyed cities and dramatically insufficient services is not something that humanitarian organizations can address comprehensively.

But as long as such solutions are elusive, we cannot abandon those who live in such miserable circumstances. There are things we can do: new and innovative partnerships between humanitarian actors and the private sector can change the face of aid. By cooperating with local businesses and developing custom products for people who live in war-zones, we can help in a more sustainable way and simultaneously reduce fragility.

The ICRC has taken a leading role in the World Economic Forum’s Global Agenda Council on Fragility, Violence and Conflict to find solutions, which increase resilience in urban conflict zones. Bringing humanitarians together with stakeholders from the private sector allows us to harness the power and resources of the private sector to support and advance humanitarian work. More ambitious social and economic agendas can only evolve if built on a more stable fundament: this is where pioneering engagement of humanitarians and business people is in high demand.

Neither humanitarian organizations nor the private sector can stop wars. But if we can reduce violence and better cope with fragility, we can mitigate the effects of wars on people. This, ultimately, is our mission.