You are here: Home / Analysis / What’s the chance of an Islamic terrorist attack during World Cup in Russia

Ramadan will end on June 15th. The world cup starts on June 14; the first match to be played between Russia and Saudi Arabia, target countries of ISIS, like reported by 112.international 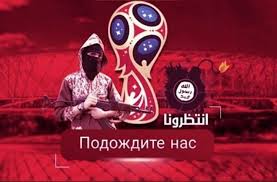 Pro-ISIS sympathizers continue to threaten the next football world championships, which will be held in Russia (June 14 – July 15). To date, the official ISIS has never mentioned in its public posts about the world cup in Russia, although the multinational nature of the event makes it a symbolic and unanimously acceptable target for terrorists.

Threats and greater involvement of sympathizers are not surprising at all; just think of the Rio Olympics in 2016. Two years ago, pro-ISIS propaganda was spread on social media to attract the sympathizers, and for the first time, it was translated into Portuguese. The same strategy adopted for other Olympic events such as Sochi and Beijing. For about three weeks, threats to world championships have been translated into Russian.

It should be noted that the ISIS message has the authority to trigger “detachments” for performing planned and large-scale attacks. The pro-ISIS messages (for which the organization takes responsibility for some strategic reasons) are aimed at the soldiers of the caliphate, those who have only been inspired without ever having had direct contact with the central nucleus of the organization.

In 2014 al-Qaeda suggested looking for specific occasions such as electoral campaigns, charity parties, sporting events, and concerts to carry out attacks. For many times, ISIS has referred in its public posts to the world cup in Russia as a target to be hit. Football fields have already been successfully attacked by the Islamic State before.

What’s the purpose of attacking the stadiums?

Terrorism aims to undermine the classical patterns, modifying and shaping the usual status quo, known by the society. From a cultural point of view, the stadiums represent the temples of sports par excellence. The jihadists regard the stadium as a church for the role it plays in the life of kafir (ISIS followers believe they are observing Islam in its most effective form). The sport fascinates people, distracts them from the tragedy of their lives, makes them experience antipodal feelings. Sport is fun, it is a family fun time. So the facility that hosts the sports game becomes a battle theater.

The stadium strategy (currently located in Europe) has already proved to be meaningful and fits into a tactic that aims at dispersing forces maximizing fear among the masses. The stadiums host tens of thousands of people: some facilities are able to contain 90 thousand fans. Obviously, they are suitable not for all the attacks. Unlike the subway, attacking a stadium with gas would not make sense because it provides an optimal condition for air circulation. The stadium has a determining factor in itself: it hosts a crowd that could become chaotic in a very short time. For example, if one of the Paris bombers had blown a bomb close to a gate full of fans, the consequences would have been far more tragic. The crowd waiting on the stadium (in front of the whole world), would have turned into a disruptive and chaotic force in case of explosions. And considering the tightened control that would theoretically prevent undermining the foundations of a stadium, deflagrating a bomb in front of a crowded entrance still remains the best tactical option. Finally, the stadium has a special feature, unique in its kind: live television. The social networks allow to reach millions of people, but this range is not comparable to a live broadcast of a football match, perhaps second to an American football game.

With the beginning of Ramadan, the Muslim world celebrates the Annunciation of the Koran by the archangel Gabriel to the prophet Muhammad. Ramadan, the ninth month of the year according to the Islamic calendar, the period in Islam is dedicated to fasting for the first revelation of the Koran to prophet Muhammad. The annual observance is regarded as one of the five pillars of Islam and obliges Muslims to abstain from sinful behavior and fight (if it is not self-defense, of course). According to Islamic Scripture, spiritual rewards of fasting multiply during Ramadan while previous sins are forgiven. The true practicing Muslims, scattered all over the world, celebrate the holy month in peace and deep self-contemplation. Ramadan will end on June 15, 2018, with the beginning of the celebration of Eid al-Fitr, one of the most important holidays of the Islamic religion, proclaiming the end of fasting.

According to the Holy Scriptures on the Night of Destiny or Laylat al-Qadr, for the first time, the Prophet Muhammad received the divine message in its entirety. It is called so because Allah decrees the destiny of creation for the coming year. In reality, it is unknown what day it was, but it is usually referred to as one of the odd nights of the last decade of Ramadan. Last year Islamic State spokesman Abu al-Hassan al-Muhajir (who is not that prepared and charismatic as his predecessor) published on his Telegram an audio message of incitement to carry out attacks during “the holy month of jihad” in Europe, Russia, the United States, Australia, and Iran (ISIS considers Shiite Muslims as apostates). The message was released June 12, twelve days after the end of Ramadan. The physical elimination of the main figures of the movement does not interrupt the digital strategic depth. According to Islamic traditions, in the Night of Destiny sins will be forgiven. In ISIS reinterpretation of Islamic theology, the murder in the last ten days of Ramadan is considered a devotional act.

Ramadan will end on June 15 with the beginning of the celebrations for Eid al-Fitr. The inaugural ceremony of the 21st edition of the World Cup will be held on June 14th in, 80 thousand spectators would attend the Luzhniki Stadium in Moscow. The first match to be played between Russia and Saudi Arabia, target countries of ISIS. In addition to the work done by Russian intelligence, the twelve stadiums that will host the World Cup will certainly be defended by several redundant defensive perimeters and by an aerial screening against drones.

How the terrorists turned Ramadan into a month of the war

Prophet Muhammad obtained the first Muslim victory in history during Battle of Badr, during Ramadan in 624. Against all odds, that victory ensured the survival of the newborn community of believers. During the Ramadan of 630, Muhammad also conquered Mecca. The jihadists exploit these historical references by manipulating them for political ends. Abdullah Azzam, the father of modern jihad, stated that “neglecting jihad is like abandoning fasting and praying, and only with jihad can the Muslim reach the highest ranks, the believer sees life on earth as a prison and aspires to reach Allah.” The reinterpretation of Islamic theology by Isis dates back to 2014, during the first sermons of Abu Mohammed al-Adnani, spokesman of the group and of the self-proclaimed caliph Abu Bakr al-Baghdadi. The jihadist language should not be understood as literal, but interpreted and set in a precise context with a clear strategic objective. In his first public appearance in a mosque in the Iraqi city of Mosul, al-Baghdadi laid the foundations of the radical new Islamist mentality by supporting the lawfulness and obligatory nature of jihad in Ramadan. Al Baghdadi’s speech decontextualized the classical prescriptions of the Koran to guarantee a religious support to homicides and martyrdom missions.

“The virtuous acts (murders) during Ramadan will be worth a thousand times more than any other period of the year. This is the month when the prophet ordered the armies to fight against God’s enemies. And God loves those who kill their enemies in his name.”

A simple passage that effectively elevated jihad during Ramadan to Muslims. The murder of the unbelievers, which is always of divine inspiration, during the Ramadan acquired a further value because it would multiply the spiritual rewards. The Holy Islamic Scripture has been so overwhelmed by messages invoking “to gain maximum benefit during Ramadan”. In the ISIS vision, the murder during Ramadan is not considered a violation of Holy Scripture, but an obligation in relation to the new modern revision of Islamic theology. Because it is earthly actions that guarantee divine rewards, murder during Ramadan makes full sense. This is the theological basis for the attacks during Ramadan, from al-Adnani defined as “the month of conquest”. If the West does not understand how Isis elaborates and decontextualizes Islamic theology, it will never be able to fight it effectively.

The first message from ISIS for Ramadan 2014

When preparing for Ramadan in 2014, ISIS began to use the word “ribat” in various reports and published in Rumia journal. Gradually introduced in the texts, it was later associated with Ramadan because of the constant interrelation of both concepts in the language. This concept implied not just usual propaganda with reference to the Islamic Middle Ages, as was erroneously assumed. The term “ribat” refers to a border post on the borders of the Islamic world, that is, a permanent structure capable of simultaneously fulfilling two goals – spiritual and military. Phrases such as “commit ribat” in the modern interpretation of jihad through classical Islamic texts began to be constantly repeated in texts and messages of the terrorists.

Since the legitimacy of ISIS among his followers is based on the return of Islamic doctrines, the inscription of Ramadan in the context of the divine struggle against the enemies of Allah was a completely meaningful step. In this case, the concept of the enemy is rewritten, and it is placed outside the grouping. The enemy has any rights, and therefore, all the thrill and remorse for brutal acts against subjects devoid of human features are destroyed.

The rhetoric of terrorist organizations often uses language and images to portray enemies, giving them vivid negative characteristics on different levels (affective, cultural, intellectual). With the constant emphasis on the enemy’s inhuman characteristics, any possibility of peaceful negotiations is killed.