You are here: Home / Analysis / What’s next for the Islamic State? 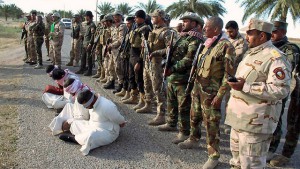 The March 27 recapture of Palmyra by the Syrian Army—with significant support from Russian and Iranian forces as well as Lebanese Hizballah—demonstrated that the resilience of the so-called Islamic State in Iraq and Syria is limited. The group is facing sustained military pressure in both countries, as both local and international actors continue to devote significant resources to rolling back the group’s territorial gains. Though the Islamic State has undeniably proven militarily capable, the group will be hard-pressed in the long-term to stand up to the combination of sustained airstrikes, U.S. Special Forces raids, and rebel groups and militaries both armed and supported by various international actors.

For all its ideological fervor, the Islamic State is also pragmatic and opportunistic. As strategic setbacks mount, the group will take steps to safeguard its key leadership, primarily by attempting to remove them from besieged territory in Iraq and Syria. While the proliferation of Islamic State affiliates has served the ideological purpose of expanding the so-called caliphate, it has also provided the group with strategic fallback positions, making it more difficult to destroy. As with al-Qaeda before it, removing the Islamic State from its core territory will not immediately remove the threat posed by the group.

Territorial control is a critical element of the Islamic State’s ideological legitimacy as a caliphate amongst its members and supporters. Therefore, the most important external positions for the group are weak states that allow for an increased level of territorial control. The most significant Islamic State presence outside of Iraq and Syria is in Libya, where the group actively controls territory along the central coast. From its self-declared capital in Sirte, the group has been able to consolidate territory in every direction, and exert pressure on territory controlled by the rival governments in both Tripoli and Tobruk. From camps along the western coast, the group has also managed to launch attacks against Tunisia.

Libya provides access to weapons, oil, and lucrative smuggling routes. It also provides a new destination for foreign fighters—particularly those from Tunisia, which has seen at least 6,000 of its citizens travel to fight in Syria. However, the growth of the Islamic State in Libya has not gone unnoticed by the international community, which has taken steps to contain the group there. As in Iraq and Syria, intervention by international actors presents a serious threat to the ability of the Islamic State to maintain its territory.

In the past year, the Islamic State has increased its presence in Yemen, targeting both the Houthi rebels and the Yemeni government. The instability in Yemen has provided the Islamic State with room to establish a foothold, and the sectarian nature of the conflict has increased the recruiting power of the group there. However, if a cease-fire were to be successfully implemented, the military focus of the Yemeni government—and its international allies—would quickly shift to the Islamic State, particularly if it continues to target government officials. The group also faces competition from al-Qaeda in the Arabian Peninsula (AQAP), which has an established presence in Yemen, and does not look kindly towards its upstart protégé infringing on its territory.

The affiliate Wilayet Sinai also presents a possible fallback position for the group, as the remote Sinai region could provide some level of security for Islamic State leadership. However, the group does not openly hold territory in the Sinai, and faces persistent pressure from the Egyptian military. If the Egyptian government perceives significant growth of the group in the Sinai, that pressure will undoubtedly increase dramatically. The Islamic State has also capitalized on the persistent and growing security vacuum in Afghanistan, establishing a presence by forming Wilayet Khorasan. For decades, Afghanistan has served as a fallback position for violent extremist groups, and it could serve the same purpose for the Islamic State. However, the al-Qaeda-aligned Taliban remain dominant, and have launched military operations against Islamic State positions.

Like its al-Qaeda predecessor, the Islamic State thrives in the security vacuums of weak states. It is not a coincidence that many Islamic State affiliates have emerged in spaces also occupied by al-Qaeda affiliates, often drawing extremist fighters away from its rival. Ultimately, wherever weak states persist, the Islamic State too will have the space to persist. Rolling back Islamic State territorial gains is, undeniably, critical to degrading the capacity of the group to carry out terror attacks, both in the region and globally. However, only by strengthening weak and failing states can the international community hope to deny the Islamic State, and other extremist groups, continued safe haven.