You are here: Home / West Asia / What the presence of Islamic State in Kashmir means to India 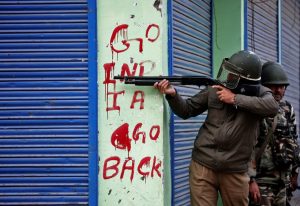 The Islamic State (Isis), with a receding presence in the Middle East, has been desperately looking for fresh battlefields for its survival and the Indian sub-continent has never gone out of its radar. Pushed back by multiple fronts in the Middle East conflict zones, it appears the radical Islamist group now wants its presence to be felt in India’s troubled Kashmir region, like reported by ibtimes.co.uk.

The Sunni extremist organisation claimed one of its operatives was responsible for the killing of a police constable in Srinagar, capital of northern Indian state of Jammu and Kashmir, on Sunday, 25 February – a striking claim by the group signalling its desire to gain a foothold.

Attackers managed to escape after the incident along with slain officer’s rifle and officials have not yet ascertained who was behind the killing. Shortly after the incident, the Isis carried a brief statement in its mouthpiece Al Amaq News Agency saying: “Assassinated an element of police in firing near the city of Srinagar in Kashmir yesterday [Sunday].”

The killed policeman was guarding a residence of a local separatist leader. This is the second time in the last three months, the Isis organisation has claimed responsibility for an attack on Indian security forces though the state and federal authorities have repeatedly downplayed such assertions.

Intelligence agencies are still working on verifying the claim, which if proved, could have serious ramifications in terms of security measures and anti-terror operations.

For the first time in acknowledging the possible presence of Isis in Kashmir, the state police chief SP Vaid told the Indian broadcaster NDTV that it was “indeed a worrying sign because Isis foothold in Kashmir will have a different meaning”. He, however, added: “There doesn’t seem to be any substantial presence of Isis.”

“I only wish it doesn’t happen in Kashmir. I am sure with the cooperation of people, we will not allow another Syria or Iraq in Kashmir,” added Vaid.

Kashmir, a hotbed for separatist insurgency and Islamic militancy in recent decades, has its own set of troubles offered by locally groomed extremist organisations and the threats emerging from neighbouring Pakistan. The valley of Kashmir is a heavily disputed territory, centred on which the nuclear-armed rivals India and Pakistan fought two major wars since their independence.

One of the key militants thought to be involved in the attack was Esa Fazili and there have been concerns that he could have pledged allegiance to the Isis. “There were apprehensions that Esa may have links with the Islamic State. Yesterday’s incident and the Isis claim has given credence to such reports,” a senior officer from the Kashmir security establishment told the Indian Express.

In May 2016, the Isis had released a chilling video calling for Indian Muslims to join the jihadand launch attacks across the country. That was the first video, a 22-minute-long footage, released for India and South Asia by the extremist group to seek revenge for the alleged sufferings of Muslims in the country.

Five Indians, who had travelled to the Middle East, and some unidentified members were seen in that Arabic video at that time.