You are here: Home / Analysis / What the loss of Mosul will mean for ISIS 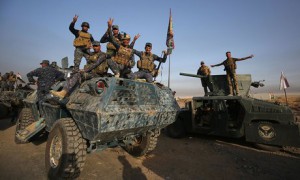 As Iraqi forces continue to push further into the Islamic State’s bastion in Mosul, the looming loss of this key city heralds the end of the Islamic caliphate as a pseudo state. The organization, however, may survive as an insurgency and more importantly through the continuity of its “ideological caliphate.”

In a rare 30-minute recording released this week, Islamic State (ISIS) leader Abu Bakr al-Baghdadi expressed confidence in victory and called on the caliphate’s mujahideen, or fighters, not to weaken in the face of their enemies. He called on them to “turn the nights of the unbelievers into days, to wreak havoc in their land, and make their blood flow as rivers.”

Baghdadi’s speech—his first public statement since last December —comes against the backdrop of significant advances by Iraq Security Forces in and around Mosul. According to recent reports, the military recaptured the ISIS-held town of Shura, south of Mosul on October 29, and entered Mosul itself on October 31, when they captured a television station in the east.

“The organization is militarily finished,” says political activist Ghamen Abed, a Mosul resident who now lives in Erbil. The group has lost large chunks of its territory in Iraq including Sinjar, Fallujah, Tikrit, Ramadi, and Qayara, among others. Dissent is also reportedly brewing in the caliphate. A recent Reutersreport reveals details of ISIS crushing a rebellion led by one of the group’s own commanders in Mosul, who intended to deliver the city to government forces. ISIS executed 58 people suspected of taking part in the plot.

The eventual fall of ISIS’s Iraqi capital would be a significant blow to the organization, likely taking it back to a pre-caliphate phase of insurgency. The Management of Savagery, a book by jihadist Abu Bakr Naji published in 2004, provides insight into a three-phase ISIS strategy dubbed Shakat al-Nikaya—or the thorn of spite. The first phase—prior to the establishment of a caliphate—begins with jihadists “exhausting” government forces by launching successive and rapid attacks. In July, ISIS claimed responsibility for one of the worst attacks Baghdad has witnessed in years, where a suicide bombing left over 300 dead. On October 21, ISIS militants attacked the strategic oil city of Kirkuk, where uniformed Islamic State fighters engaged in a day-long battle with Iraqi security forces leaving 40 dead, before they detonated their suicide belts.  On October 23, the group attacked the Rutba district, on the border with Jordan.

Peshmerga commander Ari Harisn who spoke to the Atlantic Council believes the loss of territory would force ISIS to retreat either to Syria or to the Anbar desert. Prior to his death,   ISIS spokesperson Abou Mohamad Adnani himself delivered a speech in May to that effect, underlining that “victory is that we live in the might of our religion or die upon it. It is the same, whether Allah blesses us with consolidation or we move into the bare, open desert, displaced and pursued.” In another part of his speech Adnani said the organization was not defeated when it” lost the cities in Iraq and was in the desert without any city or land.”

ISIS’ reliance on a war of attrition may not be limited to Iraq. In his speech, Baghdadi instructed his followers to invade Turkey and “turn its safety into fear,” and to launch “attack after attack” in Saudi Arabia, retribution for the kingdom choosing to side “with the infidel nations in the war on Islam and the Sunnis in Iraq and Syria.” In his May speech, Adnani sent another message to ISIS supporters in the west. “If the oppressors have shut the door of hijrah [migration] in your faces, then open the door of jihad in theirs. Truly, the smallest act you do in their lands is more beloved to us than the biggest act done here.”

Western officials, among them FBI Director James Comey, have expressed concern over the tens of thousands of foreign fighters who have joined the group—particularly those who may return to Western Europe and the United States. The Soufan Group calculates that 27,000 to 31,000 people from over 80 countries traveled to Syria and Iraq to join ISIS. Among them are 5,000 foreign fighters from Europe, 2,400 from Russia, 3,000 from Saudi Arabia, and 4,700 from the former Soviet Union.

Whether in Europe, the US, or the Middle East, authorities have called for vigilance. The UK warned in late October that ISIS extremists still pose the biggest threat to UK national security. The threat level in Britain is now officially set at “severe” meaning an attack is considered highly likely. In November, the US embassy in India warned of increased ISIS threats to its citizens, referencing the State Department’s worldwide caution against ISIS attacks targeting US citizens. In October, the Saudi Ministry of Interior said it foiled a plot to attack a 60,000-seat stadium in Jeddah during a UAE-Saudi match, identifying three terror cells operating in the kingdom. In September, Morocco dismantled an ISIS cell planning terror attacks targeting security establishments, tourist sites, and foreigners from countries participating in the US-led coalition fighting ISIS.

Before his death, Adnani argued that ISIS could not be destroyed in the presence of “an entire generation of Muslims who witnessed the establishment of the Islamic State.”  Former Mosul resident Abed points to how ISIS could continue to haunt the city. “An entire generation of Iraqi youth was brought up under the radical rule of the organization,” he says, adding that without political reconciliation, a threat will still exist. For over two years, the Islamic State’s ‘caliphate’ indoctrinated children in its territory with religious concepts aimed at propagating the state’s existence, according to a report published this year by the Quilliam foundation. Children were taught a rigid Islamic State curriculum and attended ‘Jihadist Training.’ In fact, around 300 children known as the ‘Cubs of the Caliphate’ were reportedly killed in the fighting in and around Mosul.

Despite this gloomy scenario, tribal leader Ahmad Samarrai is among those who believe that Iraqi Sunnis are fed up with ISIS. “There is an opportunity to crush the organization,” he says. While capturing the group’s Iraqi capital is one step in the battle against ISIS, a clear ‘hold, build, and develop’ strategy is the second instrumental step in neutralizing the organization, one that requires the empowering of a marginalized Sunni community.

Iraq’s track record is not great in this regard, and ISIS is likely banking on the failed governance of Baghdad and the growing Sunni-Shiite divide to stir sectarian tensions which appear to have resumed in Baghdad. In an interview with Iraqi news site Niqash, the head of the Baghdad provincial council’s security committee, Mohammed al-Rubaie, expressed concern that Baghdad is on the verge of a return to the kind of sectarian violence that plagued the city between 2006 and 2008. ISIS may also target other areas such as Diyala—where 40 percent of the population is Shiite—by escalating attacks against Shiite targets triggering a new cycle of retribution and violence. This strategy almost worked a decade ago, according to a paper by Iraq expert Michael Knight. After ISIS fighters were pushed out of Anbar province, they very nearly took control of the entire province of Diyala in 2007 by carrying out over 400 attacks per month, mostly against Shiites. Efforts by the federal government to rebuild it and lead reconciliation attempts after its recapture from ISIS in 2015, however, have been praised by the United Nations humanitarian aid coordinator in Iraq, but this same approach has not been attempted elsewhere.

Ideological and sectarian fears aside, other concerns continue to plague Iraqi cities ISIS lost control of last year. Ramadi—home to 500,000 before ISIS—is 90 percent contaminated with explosives according to Iraqi officials, and only 30,000 of the city’s displaced population has returned. In Falluja, less than one third of its 300,000 residents have returned. These cities are looking at years and millions of dollars before they are cleared of explosives and are rebuilt. Mosul’s size and more diverse population may prove even more challenging to restore to its pre-ISIS state.

The US led coalition and the Iraqi central government war on ISIS will destroy ISIS hold over its territory. But it is the annihilation of the ideological caliphate—a difficult battle still to fight—that will truly herald the end of the terror organization.