You are here: Home / Senza categoria / What the Islamic State gains from the Istanbul terror attack 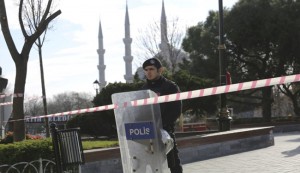 The suicide blast that ripped through a historic, touristy Istanbul neighborhood on Tuesday killed at least 10 people, all whom were foreigners. The attack, which Turkish authorities say was carried out by a Syrian national linked to the Islamic State militant group, took place in Sultanahmet, in the shadow of some of the city’s most famous monuments and sites, including the Hagia Sophia complex and the Blue Mosque.

It cemented the sense of threat that now faces the country. “Turkey is the first target of all terrorist groups,” President Recep Tayyip Erdogan declared in a televised address from Ankara.

As my colleagues Erin Cunningham and Brian Murphy report, the attack marks a departure from the Islamic State’s previous successful strikes within Turkey, which mostly targeted Kurdish and leftist political groups. This, instead, was in the heart of the country’s most iconic locale, steeped in centuries of Roman, Byzantine and Ottoman history, and a magnet for tens of millions of tourists each year.

“The vast plazas and surrounding streets are normally busy with merchants, vendors and visitors,” Cunningham and Murphy write.

Turkey’s lucrative tourism industry contributed about $34 billion to the country’s GDP in 2014, but the recent havoc of the Syrian civil war, as well as hostilities with Russia, led to a pronounced dip over the past year. A bombing of this scale in Sultanahmet will only intensify the jitters.

According to Hurriyet Daily News, an English-language newspaper based in Istanbul, the attacker — identified as Nabil Fadli, a 28-year-old Syrian man who was apparently born in Saudi Arabia — joined a throng of some three dozen German nationals touring near the ancient Obelisk of Theodosius. He then blew himself up. A Turkish official told the Associated Press that nine of the dead were Germans.

It’s not clear whether the Syrian attacker had specifically targeted Germans, but the casualties underscore a tragic irony given the extent to which Germany has opened its doors to Syrian refugees.

“By targeting Germans, [the Islamic State] seems intent on creating an anti-refugee backlash in Europe, hoping to fuel already rising anti-Islam sentiments on the continent,” Soner Cagaptay, Turkey expert at the Washington Institute of Near East Policy, writes in an email to WorldViews. “Additionally, this attack will, unfortunately, drive further backlash against German Chancellor [Angela] Merkel’s pro-Syrian refugee policy.”

Merkel spoke defiantly from Berlin. “Today Istanbul was hit. Paris has been hit. Tunisia has been hit. Ankara has been hit before,” she said, referring to earlier Islamic State strikes in various parts of the world last year. “International terrorism is once again showing its cruel and inhuman face today.”

The German leader was hailed by Time magazine as the Person of the Year in 2015, in large part because of her courageous, moral stance regarding the plight of refugees. But in the face of growing domestic pressure, Merkel has backtracked, taking a tougher line while seeking to fast-track deportations of asylum seekers who commit crimes abroad.

For the Turkish government, the attack marks a new, perilous moment. Last year, the Islamic State carried out what’s regarded as the worst terror strike in the history of the Turkish republic, killing 102 people at a leftist rally in Ankara. Rather than serving as a rallying point for national unity, the Ankara bombings only deepened the country’s bitter polarization, with critics of Erdogan and his ruling Justice and Development Party accusing the government of incompetence and even tacitly enabling the militants.

In recent months, Turkish authorities have stepped up counterterrorism operations against the Islamic State, cracking down on suspected cells within the country while also joining the United States in its air war against the jihadists’ positions in Syria. There has also been a greater clampdown on Turkey’s porous border with Syria, through which the Islamic State maintains its networks to the rest of the world.

Vice President Biden is expected in Turkey later this month, a visit that will signal expanding security cooperation in the fight against the extremist group.

“The Turkish-U.S. plan is to take a 60 mile long territory held by Isis across the Turkish border in Syria, plugging the last gap for Isis access to Turkey and Europe from Syria,” writes Cagaptay, using an alternative name for the Islamic State. “Isis knows that this move will cripple its finances and recruitment drive and prestige and is, therefore, acting preemptively to hurt Turkey so Ankara will stand down or at least cool off against the group.”

Still, for much of last year, Ankara seemed as, if not more, concerned by the gains made by Syrian Kurdish factions, which have direct ties to the Kurdish separatist movement within Turkey, as by the ravages of the Islamic State. A counterinsurgency operation is ongoing in the country’s restive southeast, where a number of Kurdish-majority towns are under curfew. On the same day as the Istanbul bombing — and on the other side of the country — funerals were held for Kurdish youths killed in clashes with Turkish security forces.

On Tuesday, Erdogan issued a strongly worded riposte to a letter signed by 1,000 local and foreign academics — including the leftist American scholar Noam Chomsky — calling on him to halt the campaign in the Kurdish areas and return to the table to negotiate with Kurdish separatists.

“You are not enlightened persons, you are dark,” Erdogan fumed. “You are nothing like intellectuals. You are ignorant and dark, not even knowing about the east or the southeast.”

Skeptics of Turkey’s Syria policy believe that Erdogan and Prime Minister Ahmet Davutoglu have played a dangerous game in their conspicuous support of rebel groups in Syria — and that now the chickens are coming home to roost.

“Today’s bombing in Istanbul may be the incident that finally brings Turkey to shift focus and concentrate its efforts on the true enemy: violent jihadist groups,” writes Stephen Kinzer, a senior fellow at the Watson Institute for International and Public Affairs at Brown University. “It is late in the game for such a switch.”