You are here: Home / Analysis / What remains of the Islamic State? 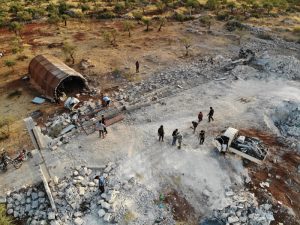 U.S. President Donald Trump announced on Sunday that the leader of the Islamic State, Abu Bakr al-Baghdadi, had died in a raid by U.S. special operations forces in northern Syria—detonating a suicide vest during the pursuit. It’s a major success for the president—and his national security team—as he faces a mounting impeachment inquiry. “Last night the United States brought the world’s No. 1 terrorist leader to justice,” Trump said, like reported by foreignpolicy.com.

Plans for the raid were underway well before the United States began withdrawing troops from the region, and the New York Times reports that the sudden decision to pull out of Syria earlier this month complicated the Pentagon’s ability to carry out the operation. Finding the ISIS leader was a top priority for Trump, and the Kurdish-led Syrian Democratic Forces spent five months working to gather intelligence on his location before the Turkish incursion began this month.

[In this 2016 series for Foreign Policy, an Islamic State insider details how Baghdadi’s scheming paved the way for the group’s expansion into Syria, throwing off the yoke of al Qaeda along the way.]

What remains of ISIS? Even without Baghdadi, the Islamic State still poses a threat in Syria and Iraq, particularly after the Turkish offensive reconfigured the situation in the country’s northeast—and led hundreds of former Islamic State fighters to escape Kurdish-run prisons. Another raid—conducted with the SDF—reportedly targeted Baghdadi’s second-in-command, but that operation has not officially been confirmed, FP’s Lara Seligman reports.

New leadership. While Baghdadi’s death isn’t likely to have an immediate effect on operations on the ground, it does mark a “turning point” for the Islamic State, the Washington Post reports. The decentralized group will have to select its next leader nearly a year after its territorial defeat and as it struggles for influence on the ground in Iraq and Syria. While some have escaped, thousands of former fighters remain in prison.