You are here: Home / Senza categoria / What jihadist fighters do in their spare time 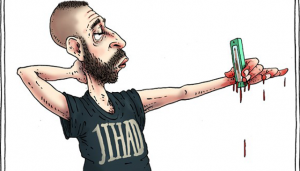 Most of what’s reported about jihadist fighters in terrorist groups like ISIS and Al Qaeda focuses on their military activities, and it’s not often that we get a look behind the scenes at other aspect of these communities.

Thomas Hegghammer, an expert on violent Islamism at the Norwegian Defense Research Establishment, gave a lecture at the University of St. Andrews in April about what jihadis do in their spare time.

And Shadi Hamid, a senior fellow at the Brookings Institution and Middle East expert, tweeted that the transcript is one of the best things he’s read in months.

Hegghammer called downtime activities that knit jihadi communities together “one of the last major, unexplored frontiers of terrorism research” that could “shed important new light on how extremists think and behave.”

“I can’t quantify it, but it seems most non-military activities were orthodox devotional practices: prayer, invocations, ablution (washing yourself), Quran recitation, and the like,” Hegghammer said.

“I found no support for the claim you sometimes hear about jihadists being hypocritical opportunists who don’t really care about religion. Some of them may have been unobservant before they join, but once they’re in, they seem very meticulous about observance.”

They also talk about day-to-day life in the “caliphate,” the swath of territory ISIS (also known as the Islamic State, ISIL, and Daesh) controls in Iraq and Syria.

Female ISIS members seem to be especially active in discussing their downtime activities. They travel to the caliphate to wed fighters and produce children that ISIS is attempting to raise up as the next generation of militants.

The women of ISIS discuss their pets, shopping, cooking, driving, and doing household chores like laundry.

These tweets should be taken with a large grain of salt considering ISIS’s extensive propaganda strategy that lures people to the caliphate by painting an unrealistic and overly rosy picture of what life is like there. But Hegghammer also found examples of some of these recreational activities in his research.

“We see a broad range of practices I would call recreational (since they’re elective and aesthetics or entertainment),” he said.

Others have studied the poetry of jihadis.

A Syrian-born 20-something, Ahlam al-Nasr, has earned the title of the “Poetess of the Islamic State” and is known to write using themes of radicalization, terrorist recruitment, and the glorification of violence.

In her poems, al-Nasr has celebrated ISIS victories by praising the “lions” whose “fierce struggle” had “brought liberation” to cities in the Middle East. She has also written about the struggles of living amid violence and constant upheaval, noting in one poem that bullets in Syria have “shattered our brains like an earthquake.”

An al-Qaeda “job application” that was recently declassified even asks how their recruits like to spend their free time. Applicants are required to list “hobbies and pasttimes” on the form.

ISIS has taken some cues from al-Qaeda, but seems to recognize even more so the importance of showing the “softer” side of the terrorist group. One propaganda video was shot at a mall and amusement park in ISIS territory. Photos released by the group have shown off a “luxury hotel” in ISIS-held Mosul, Iraq.

ISIS differentiates itself from other terrorist groups like al-Qaeda by marketing itself as an Islamic utopia that can provide happiness and stability to its residents, giving outside observers a rare look into how militants spend their free time.

Ultimately, jihadi communities seem to share some of the same characteristics as less-extreme societies.

“Military life is about much more than fighting,” Hegghammer said.

“Look inside any militant group — or conventional army for that matter — and you will see lots of artistic products and social practices that serve no obvious military purpose. Think of the cadence calls of the U.S. Marines, the songs of leftist revolutionaries, or the tattoos of neo-nazis.