You are here: Home / Mediterranean / What is needed to prevent a Western Sahara war? 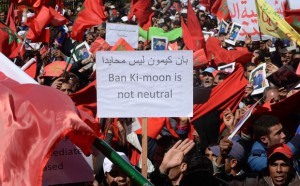 As the publication of the annual report by UN Secretary General on renewing the mandate of the UN mission in Western Sahara is due next week, Morocco has embarked on a diplomatic flurry over its proposed wide autonomy plan for the disputed territory following the worst crisis between Rabat and the United Nations over Ban ki-moon’s use of the word “occupation” to describe Morocco’s annexation of the disputed territory during his visit last month to the Polisario Front refugee camps in Algeria.

Moroccan King Mohammed VI held last week a long phone conversation with Russian President Vladimir Putin over the issue, according to a statement from the Royal Cabinet.

Putin and Mohammed VI have decided to strengthen their coordination and maintain continuous contact on this issue in order to arrive to a balanced and productive result by the end of April, said the statement.

“Russia takes due account of Morocco’s position concerning the settlement of this problem,” said a joint statement of Putin and King Mohammed VI after their meeting in the Kremlin.

“The Russian Federation and the Kingdom of Morocco do not support any temptation to accelerate or hasten the political process, nor any violation of the parameters defined in the Security Council resolutions to find a solution to the Sahara issue,” it added.

Washington expressed its support to Morocco’s “credible” autonomy plan for the disputed territory.

“It represents a potential approach that could satisfy the aspirations of Western Sahara.”

French Prime Minister Manuel Valls reiterated Sunday during an official visit to Algiers that the position of France, a traditional ally of Morocco, on the issue remained “unchanged” and that any solution must be found within the framework of the United Nations.

Like the US, France reaffirmed that the autonomy plan presented by Morocco in 2007, “is a serious and credible basis for a negotiated solution.”

Spain offered to mediate between Morocco and the UN in a bid to defuse the rising tension.

Spain’s Secretary of State for Foreign Affairs Ignacio Ibanez said that Madrid “maintains a dialogue with Morocco and other parties” and that his country “wants to help, not to add to a situation already complicated in itself.”

In a U-turn, Ban said at the end of last month that he regretted his recent remarks over the Western Sahara conflict that were not deliberate, adding that there was a “misunderstanding” over his use of the word “occupation” to describe Morocco’s annexation of the disputed territory, according to his spokesman Stephane Dujarric.

Ban angered Morocco last month when he used the word “occupation” to describe Morocco’s annexation of the disputed territory in 1975, when it took over from colonial power Spain, after a visit to refugee camps in southern Algeria, prompting Rabat to take several measures against the UN mission in the disputed territory.

“His use of the word was not planned, nor was it deliberate, it was a spontaneous, personal reaction. We regret the misunderstandings and consequences that this personal expression of solicitude provoked,” Dujarric said.

Rabat took quick measures and asked the world body to close its military liaison office in the disputed territory a day after the North African kingdom expelled most of the non-Moroccan civilian members of the UN’s MINURSO mission.

Ban criticised Morocco and the Polisario Front for failing to make “real progress” towards an “acceptable” solution to end the 40-year conflict.

The North African kingdom accused Ban of no longer being neutral in the Western Sahara dispute while Moroccan analysts said that Ban is giving legitimacy to the Polisario Front to wage a war against Morocco.

Political analyst Manar Slimi warned that the UN chief was bringing closer a war between Morocco and Algeria in an interview with Morocco-based news channel Medi1 TV.

“Ban should bear full responsibility in case of war between Morocco and Algeria which would jeopordise both regional and international security,” said Slimi.

Morocco demanded 81 civilian expatriate UN employees and three African Union staff leave the mission. But The UN said 11 were no longer working for MINURSO. 73 of the UN personnel have left Western Sahara so far under the Moroccan expulsion order.

The UN mission was in charge of organising a referendum on the future of the disputed territory, but the task was never accomplished.

The Polisario Front called Morocco’s decision to expel the UN civilians a slap in the face to the Security Council, and a dangerous provocation that could lead to war.

The separatist movement’s leader Mohammad Abdulaziz warned in a letter sent this week to the UN chief that Sahrawi separatists will return to armed struggle unless Morocco is put under real and direct pressure to fully restore the UN mission in Western Sahara.

Morocco, which considers the disputed territory to be part of the kingdom and insists that its sovereignty cannot be challenged, has proposed wide autonomy for Western Sahara. The Polisario Front rejects the proposal and insists on the right of the Sahrawi people to determine their own future.

The Security Council, which gives MINURSO’s mandate, has neither officially supported the UN chief, nor condemned the measures taken by Rabat following Ban’s statements.

The UN’s top political affairs official, Jeffrey Feltman, has warned that MINURSO troops would not be able to operate without the civilian component as only 27 civilian employees remain.

“Many core functions of the mission would not be able to be performed with such a small number of staff,” said Haq.

“Without the peacekeeping force performing in the way it is mandated to do, there will be a real risk to return to heightened tension and possibly even conflict,” he warned.

Rabat backtracked on its decision last month to withdraw its 2,300-strong peacekeeping contingent in Ivory Coast, Congo and Central African Republic after concluding that it could not contribute to the deterioration of security situation in “friendly countries.”

The four-decade conflict seems to remain deadlocked as long as Algeria and Morocco, which haven’t yet solved their border dispute, fail to reach a common ground on the issue.

However, with Algiers backing a referendum in the disputed region versus Rabat’s autonomy plan, the international community – which seems to be giving up hope of a final settlement of the Western Sahara issue – should engage in a major initiative to bring Algeria and Morocco to the peace table in order to resolve this long-standing conflict.