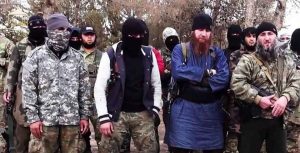 The reduction of the territory controlled by ISIS has led many of its Russian-speaking fighters to return to their homelands in the North Caucasus or Central Asia, prompting the regimes in these areas to take defensive measures lest those people undermine stability there (fergananews.com/news/27500).

But there is another possibility that few appear to have continued, like reported by windowoneurasia2.blogspot.it: the chance that these Russian-speaking ISIS followers will not return home but go elsewhere to continue the fight, a possibility that is especially worrisome given that Russian security services have close ties with some of these fighters and that the Kremlin may use them as leverage against other countries.

Those dangers, the exact dimensions of which are far from clear, are suggested by a report on the Versiya portal today that “Russian-speaking militants have moved [from Iraq and Syria] to Egypt,” where they have formed their own detachment in the Sinai Peninsula and now have surfaced in a big way (versia.ru/russkoyazychnye-boeviki-peremestilis-v-egipet).

One of “the Russian-speaking members of ISIS” now in the Sinai showed to the media weapons that it had seized from the Egyptian army and declared that this group of ISIS fighters were opposed to the Egyptian President Abdul-Fattah as-Sisi and were ready and able to fight his regime.

Versiya reported that a Russian television had dismissed the video clip as being “unofficial,” although it did not specify what that means, and that, given that the clip did not include any discussion of Russia, it was intended for “internal use” in Egypt, a place many ISIS fighters have passed through as students at Cairo’s Al-Azhar University.