You are here: Home / Europe / What if Daesh launches a chemical attack in Europe? 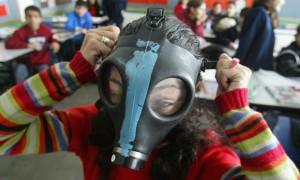 The UK government must consider the possibility of an Islamic State attack on its territory with unconventional weapons. As Europe debates how to deal with Isis in the aftermath of the Paris attacks, Isis is revelling in what it considers success, and is undoubtedly planning the next assault. Only that the next strike may be just as Isis vows: more lethal, even more shocking, it may just be one where the internationally banned abhorrent weapons of mass destruction are used. The UK, and other states fighting Isis, need to be on alert.

French prime minister Manuel Valls has already warned the French parliament that Isis may use chemical and biological weapons in future, in a speech aimed at seeking parliamentary approval to extend a state of emergency. Valls’ office stressed that his mention of the possibility of a chemical weapons attack was “not new information on the status of the threat, just a realistic observation”. “Middle East experts know that Daesh [Isis] seeks and uses chemical weapons,” a spokesman told Le Monde. “To not consider this possibility would be a mistake.”

On 14 November the French government authorised the use of atropine sulfate, which can be used as an antidote in the event of chemical attacks. The British government is yet to announce any such measures. Security around Paris’s water supply recently increased following concerns that they might be vulnerable to a unconventional attack.

Valls’s warning should not come as a surprise since Isis now possesses and is viewed as capable of manufacturing its own chemical weapons. There is evidence that the movement has already used these weapons in recent months in Syria and Iraq, with incidents against Kurds in northern Iraq in July and in the town of Marea in northern Syria in August.

There is a very real risk of Isis using unconventional weapons in Europe and beyond. What makes Isis so dangerous is its radical ideology coupled with its continued success in recruiting hundreds of foreign fighters, including some with degrees in physics, chemistry, and computer science, and some who have previously worked in Saddam Hussein’s weapons of mass destruction (WMD) programme. These recruits have the skills to manufacture lethal weapons from raw substances as well as access to serious funding. After the US-led invasion of Iraq in 2003, there was a consensus that no militarily usable WMD were found, but the Iraq Survey Group in its final report in 2004 stated that there is a “possibility that some weapons existed in Iraq, although not of a military significant capability.”

In 2005, according to a recent New York Times report, the CIA repeatedly purchased and destroyed Borak nerve agent rockets from an Iraqi seller, but the relationship had “dried up” in 2006. That year, a US House of Representatives permanent select committee on intelligence stated that: “Coalition forces have recovered approximately 500 weapons munitions which contain degraded mustard or sarin nerve agent.”

These munitions meet the technical definition of WMD, according to the commander of the National Ground Intelligence Center, who also warned of the danger of remnants of these materials falling into the wrong hands: “Badly corroded, they could not currently be used as originally intended … though agent remaining in the weapons would be very valuable to terrorists and insurgents.” It remains unclear whether all those munitions found have been destroyed and whether all of them indeed have been found.

In July 2014, the International Atomic Energy Agency (IAEA) disclosed that militants linked to Isis “seized a large quantity (40kg/88lb) of ‘uranium compounds’ from Mosul University in northern Iraq. The unspecified material was described by the IAEA as ‘low grade’ nuclear material.”

Also in 2014, Isis controlled the so-called al-Muthanna site in Iraq for some months. According to UN reports, the bunkers from the past Iraqi chemical weapons programme at this site contained “2,000 empty artillery shells contaminated with mustard agents, 605 one-tonne mustard containers with residues and heavily contaminated construction material”. Iraq has retaken possession of the site, but due to its poor state is not able to conduct a full assessment. According to experts, due to its limited toxicity, this material could be used to spread panic rather than to inflict serious physical harm. Yet it is not without risk and casualties should not be ruled out.

As Wolfgang Rudischhauser, director of the WMD Non-Proliferation Centre at Nato headquarters in Brussels, states in his article Could Isil go Nuclear? “Isil actually has already acquired the knowledge, and in some cases the human expertise, that would allow it to use CBRN [chemical, biological, radiological, nuclear] materials as weapons of terror.” He explains that Isis differs from groups like al-Qaida because of the lethal combination of access and expertise that Isis has acquired. Osama bin Laden reportedly advised against use of CBRN because of the problem of access and handling of such materials, but Isis is different and might be tempted to use these materials.

As Europe faces an imminent threat of more Isis attacks, more attention needs to be given to the possibility of an attack with unconventional materials. The UK government needs to inform the public about the nature and scope of the threat and what it is doing about it. Military and civil prevention and response strategies need to be reassessed and addressed. As the threat is not only to the UK, coordination with the EU and Nato is essential and enhanced intelligence-sharing is required. Returning foreign fighters and home-grown radicals must be monitored closely given the knowledge they may have acquired and the easy availability of industrial chemicals for those determined to use them.

In 1990, during the Gulf war, Israelis were advised to carry a small bag containing a gas mask and antidotes to a chemical attack at all times. People felt that they were informed about the nature of the threat and they were prepared for an attack; they knew the risk and were adequately equipped. They knew that they should seek cover in sealed rooms above ground in case of a chemical attack. They felt empowered to deal with any kind of potential threat. Even as scud missiles were landing in Israel, people went to work, children went to school, and with every missile that landed the public was given precise details about the nature and scope of the attack.

The nature of the Isis threat is very different, and the UK needs to tailor a response according to an up-to-date assessment of threat perception. Keeping silent about it is not the answer. The public has the right to know and it needs to be prepared.