You are here: Home / Analysis / What does Islamic State want in Egypt? 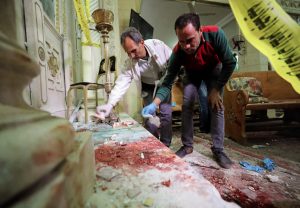 The twin bomb blasts that tore through two Christian churches in Egypt on Palm Sunday marked the latest episode in the Islamic State militant group’s (ISIS) violent campaign against the country’s Coptic minority, like reported by newsweek.com.

The attacks on a church in the Nile Delta town of Tanta and a cathedral in Egypt’s second city of Alexandria came as churches were packed with worshippers marking the beginning of the Easter week.

In Tanta at least 27 people were killed and 78 injured as the first bomb exploded inside St George’s Church. Hours later a second bomber detonated an explosive device as he rushed towards St Mark’s Cathedral in Alexandria, killing at least 17 and wounding 48.

At least 44 died in the two separate bombings, the worst attack on Egypt’s Copts in decades. In the aftermath of the explosions, ISIS’ Egyptian affiliate—known as Sinai Province—claimed responsibility for the attacks, naming the bombers via its Amaq news agency.

In the wake of the attacks, many in Egypt’s Coptic community have remained defiant,saying they will not flee their communities.

Marcos, an Egyptian monk from the Coptic Orthodox Patriarchate in Jerusalem, who declined to provide his last name for security reasons, told Newsweek on April 10 that Coptic Christians have always stayed in the country despite attacks.

The origins of ISIS in Egypt

The forerunner to the Islamic State’s Sinai Province was Ansar Bait al-Maqdis (ABM), which first emerged in 2011 when it claimed responsibility for a cross border attack launched from the Sinai on Israel.

According to the U.S.’ counter terrorism guide, a government directory of listed terror groups, AMB’s primary goal was the “destruction of Israel, the establishment of an Islamic Emirate and the implementation of Sharia in the Sinai Peninsula.” Jack Kennedy, an analyst at IHS Jane’s Intelligence, tells Newsweek ABM grew out of militant Bedouin tribes operating in the Sinai, monopolizing smuggling networks, most likely over the Egyptian frontier into Gaza.

“It’s very likely that most of the founding members of the group, as a cohesive Salafi jihadist group, met and were radicalized in Egypt’s prisons before January 2011,” he says.

By 2013, when Muslim Brotherhood President Mohammed Morsi was ousted as leader, the group had already pivoted away from attacks on Israel to targeting the Egyptian security forces. The shift resulted in a spike in Egyptian troop casualties.

The government of Egyptian President and former General Abdel-Fattah el-Sissi has imposed a widespread media blackout on the Islamist insurgency. However, Sinai Province made headlines internationally following the downing of Metrojet Flight 9268 i n O c t o b e r 2 0 1 5. The crash resulted in the deaths of 224 mostly Russian tourists.

Sinai Province claimed responsibility for the blast through its leader, Abu Osama al-Masri, according to contemporary media reports. Sinai Province was also able to use an extensive ISIS propaganda network to spread its message when a picture of the bomb appeared in the jihadis’ propaganda magazine Dabiq.

According to Reuters since January 200 families from the Coptic minority have fled their homes in the Sinai. The exodus followed a series of brutal attacks when a list of Christians in the peninsula and an incitement to kill them was circulated by ISIS. Copts comprise about 10 percent of Egypt’s 90 million people, making them the largest Christian minority in the Middle East.

“Focusing on targeting Christians is most likely a strategic decision on behalf of their leadership to create the situation of real sectarian conflict in Egypt,” Kennedy explains. “With the deployment of military forces to supplement the police and the re-imposition of a state of emergency, the idea would be to provoke sustained protest from Christians.”

Sinai Province has not only looked to divide between Egypt’s majority Muslim and Christian communities. On March 29 the group decapitated two elderly men accused of practicing witchcraft and apostasy, posting a video of the execution on social media. The language used in the video indicates the two men were most likely executed for their adherence to Sufism, a mystical branch of Islam.