You are here: Home / Analysis / What are Turkish backed Syrian mercenaries doing in Azerbaijan? 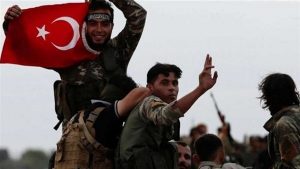 On 12 October 2019, female Kurdish politician, Hevrin Khalaf (35) was travelling from Raqqa to Tal Abyad in Northern Syria to promote peace between Kurdish and Arab tribes, and to encourage women to oppose patriarchal domination. Her car was intercepted by the radical jihadist Ahrar al-Sharqiya, a proxy group trained and deployed by the Turkish state. They captured Khalaf alive and brutally murdered and mutilated her, like reported by opendemocracy.net.

Pro-government Turkish media hailed the execution of Khalaf and touted it as a “successful act”. Reuters and the Guardian have recently reported the presence of Syrian jihadists in Nagorny Karabakh. On 1 October, French President Emmanuel Macron said that Syrian jihadists had travelled from the Turkish city of Gaziantep to the Caucasus to fight alongside Azerbaijani soldiers in Nagorny Karabakh.

How can we understand the presence of these Turkish-backed Syrian mercenaries in Azerbaijan?

To understand the Turkish policy of deploying radical-Islamist mercenaries in Iraq, Syria, Libya and Azerbaijan, it is necessary to take a glance at the history of the Ottoman state and the foundation of the Turkish state.

The deployment of mercenaries by the Ottoman state dates back to the nineteenth century when its head, Sultan Abdülhamid II, created the Hamidian Cavalry which was drawn predominantly from Turkmen and Kurdish tribes.

The Sultan supplied them with weapons, organisational structures, training, and immunity as they attacked Christian minorities and critics of the Sultan. In many cases, they acted on orders of officers and officials to perpetrate atrocities including murdering, plundering, stealing the property of peasants and displacement of local populations.

The Hamidian cavalry justified their actions by claiming they are acting out of “hunger but not by choice” because the Sultan had broken his promise to provide them with rewards.

Turkish President, Recep T. Erdogan referred to these groups as “national structures,” a term analogous to the Kuvayi Milliye forces, or the irregular Ottoman-era forces of the Turkish War of Independence. He added that these jihadists are fighting alongside Turkish soldiers and highlighted that the Turkish state is not ashamed but rather takes pride in cooperating with these jihadists.

The Turkish state deployed these jihadist groups during several invasions against the Kurds, for example, in the towns of Afrin in 2018, and Tel Abyad in 2019, in Northeast Syria. According to the verified report of the OHCHR, the Turkish-affiliated groups committed war crimes against the Kurdish population. The Turkish state and its affiliated Islamic groups were accused of “grave violations” such as a large number of killings, kidnappings, displacement, land grabbing as well as seizures of properties from the Kurdish population.

Turkish mercenaries detained many Syrian Kurds and transferred them to Turkey for trial. The OHCHR accused Turkey and its Islamist mercenaries of using water as a weapon against the Kurdish population since they deliberately disrupted the water supply, as well as cutting off electricity. Moreover, according to the Syrian Observatory for Human Rights (SOHR) the Turkish state moved around 18,000 mercenaries – including 350 children under the age of 18, as well as 2500 Tunisian ISIS jihadists – from Syria to fight alongside the forces of the pro-Turkish government in Libya.

This reality of recruitment, training, and deployment of Islamist extremists by the Turkish state under the Erdogan regime is an old instrument of the new expansionist and nationalist Turkish policy. To put it bluntly, the mercenaries have become the unlawful partners of the official Turkish regime through their access to structures of state power and resources, and the Turkish state even grants them immunity from international law. Thus, the Turkish regime sponsors and constitutes a radical Islamist army.

In other words, across much of the region, Islamist extremists have become the new face of Turkey’s aggressive expansionist policy, causing violent conflicts, chaos, and intervention.

One of the generals of the SNA, Ziyad Haci Ubeyd, has publicly stated that 70,000 SNA fighters are ready to fight for the Turkish interests and security wherever they are required. He conceded that they are already in Azerbaijan fighting against the Armenian forces and, thus, returning the favour for the support provided by Turkey.

. The UN General Assembly has already banned the activities of mercenaries as well as their “recruitment, use, financing and training” in 1989, due to their violations of human rights, and their threat to the territorial integrity of states, including the rights of local people to self-determination. This convention which has been ratified by 45 states came into effect in 2001.

However, by supporting and using these Islamist groups, the Turkish state violates this treaty. These mercenaries have serious implications for stability in the Middle East and could lead to the further deterioration of an already fragile situation. This could ultimately impact Europe if EU and NATO states fail to prevent the Turkish regime from deploying lawless mercenaries who act as killing machines on behalf of the Turkish state.