Pieces of the jigsaw that is the planned intervention in Libya are slowly coming together. 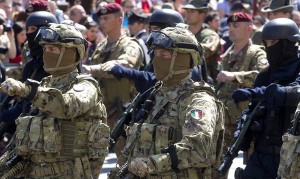 Planning is at an advanced stage, special forces are already on the ground and air power assets are being moved within range: a new Western military intervention in Libya is edging ever closer.

But a long-anticipated move against offshoots of the Islamic State group remains on hold as long as Libya has not formed a unified government with the authority to ask for help to stem the extremist group’s growth.

The legitimacy of any intervention is a delicate issue and key for Italy, which has agreed to lead a UN-mandated international stabilisation force into its troubled former colony provided it also has credible cover from a national authority.

Hence the hasty reaction from Italian officials when Brigadier General Donald Bolduc, the commander of US special-operations forces in Africa, let slip this week that a “coalition coordination centre” was already up and running in Rome with a view to eliminating the IS threat in Libya.

Domenico Rossi, number two in the Italian defence ministry, was quick to fire off a terse rebuttal. “We are awaiting the formation of a Libyan government, there is no ‘war room'” Rossi tweeted.

Handfuls of US, British and French special forces have already been spotted in Libya.

And a contingent of around 50 Italians is about to join them, Il Corriere della Sera reported Thursday, citing a classified order signed by Prime Minister Matteo Renzi last month.

The secret services have been tasked with evaluating the balance of forces on the ground, providing intelligence and perhaps weapons and communications tools to potential allies against IS.

The group controls significant territory around the central city of Sirte and also has forces in the eastern city of Benghazi and, to the west of Tripoli, around Sabratha, where a US air strike aimed at an alleged IS training camp left some 50 people dead on February 19.

That attack was carried out with the use of British airbases. The US has since secured agreement from Italy that a base in Sicily can be used for drone strikes against IS in Libya and French aircraft carrier the Charles de Gaulle has been redeployed from the Gulf to the Mediterranean, officially for training exercises with Egypt.

In Sabratha, the commander of a group loyal to the Fajr Libya (Libyan Dawn) coalition, told AFP that British forces had been been in touch with local militias and that he anticipated a campaign against IS starting soon.

IS’s presence in Libya has become an increasing source of concern to Western governments wary of a repeat of Paris-style attacks on their soil.

The group is estimated to have between 3,000 and 5,000 fighters in the Sirte region, including Tunisian, Sudanese, Yemeni and Nigerian nationals.

“It is urgent to act,” said Foreign Minister Paolo Gentiloni, a prominent critic of the 2011 NATO-led intervention in Libya which led to the current chaos in the country.

“We have already seen how illusory can be the benefits of intervention without a medium to long-term perspective. We have to avoid repeating the errors of the past by acting precipitately.”

US officials said the currently-stalled attempts to establish a sole Libyan authority would have to be completed before any action could be contemplated.

“There has to be a viable partner on the ground to work with,” a US defence source said.

“I don’t think there is an interest in attacking blindly without a viable partner.”

As things stand, the internationally recognised government based at Tobruk in eastern Libya has said it must have a veto on any intervention while its Islamist-influenced rival in Tripoli says it would regard military action as tantamount to an invasion.

With the stabilisation force envisaged at around 6,000 troops maximum, it seems likely any anti-IS campaign would be largely conducted from the air and designed to back up local groups seeking to oust the Islamist group from Libya.

“A military occupation would be absurd, has never been considered and certainly remains ruled out,” insisted Defence Minister Roberta Pinotti.

But there was also a word of warning from a close Libya watcher. “Experience elsewhere has clearly shown air strikes are not enough. Without ground forces, national or international, they will not work,” warned Alshiabani Abuhamoud.