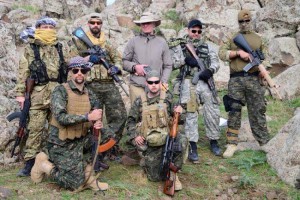 An especially tall American would stand out in most places around the world.

But when John Cole, 23, a towering 7-footer, joined the Kurdish Peshmerga forces as a volunteer, he became an instant celebrity. Kurdish female fighters nicknamed him the “Long Tiger.” Peshmerga troops came from miles around to have their pictures taken with him. Inside Kurdish houses, Cole says he literally hits his head on the ceilings.

“I joined Peshmerga because I love the Kurdish people,” he told VOA. “They are very kind and share everything they have. I joined to stop Islamic State terrorism from killing the people I love.”

Cole’s visible status among Kurdish forces has put a spotlight on the quiet but steady flow of foreign fighters joining the Kurdish ranks — especially from the United States.

In recent months, dozens of Americans have traveled to join the Peshmerga, according to interviews with Kurdish commanders and a few American volunteers.

“Right now, 120 foreigners from America, Canada, Europe and other countries who want to volunteer are in contact with me,” Tariq Ahmed, the deputy commander of Peshmerga forces in Kirkuk, told VOA.

Commanders say they are strictly volunteers and are not paid, but are given shelter, food and contact with troops. Foreign fighters do not appear in video footage of frontline battles against the Islamic State.

Most seem to be acting in advisory roles. And like Cole, who says he comes from Charlotte, North Carolina, and previously worked in the medical biohazard field, volunteers reveal scant details about their personal lives — even to their Kurdish commanders.

They include Kat Argo, a freelance journalist from California who has worked in war zones. Argo told VOA she joined the Peshmerga to fight against IS and provide humanitarian assistance to war refugees.

Joe Pollard, another American volunteer, said he is a U.S. military veteran who did several tours of duty in Iraq after 2003. He told VOA that he joined the Peshmerga to free “Kurdistan” from IS oppression.

Spike in flow of Westerners

Jabar Yawar, chief of staff for the Kurdistan Region’s Ministry of Peshmerga, told VOA that his ministry has no data about the number of Westerners who have volunteered to join the Kurdish forces.

“We won’t allow the fighters to come officially,” Yawar said. “They come to Kurdistan as civilians. We have no connection to them. We have no documents, no data and no information about the volunteers.”

Halgurd Hikmat, the spokesman for the Ministry of Peshmerga, told VOA that the arrival of foreign volunteers is a relatively new phenomenon that has spiked as Kurdish fighters increasingly battle IS.

“We do not provide them any compensation,” Hikmat said. “But they are treated as equals to Peshmergas if they are wounded, crippled or martyred. … We have even provided reparation salaries to the families of the volunteers who were martyred in the battlefield.”

Hikmat said there has been one casualty among foreign fighters.

Kurdish commanders say they provide the volunteers with food, accommodation and training.

“We also provide them with AK-47 weapons that belong to the Ministry of Peshmerga,” Muhsin Muhammad, chief of the Peshmerga Health Directorate, told VOA.

“The volunteers are mostly veterans, and it will take them less than an hour to learn how to use our Kalashnikovs, as they have willingness and desire to learn,” Dler Mawati, the deputy head of the Peshmerga Affairs Committee of Kurdistan’s parliament, told VOA.

Cole said that he has not received training and doesn’t need any.

“I have pre-existing weapons and anti-terror training, as well as minor medical training,” he said. “I can handle anything that comes my way.”

Cole said he works at a Kurdish logistics base in the Makhmur frontline south of Irbil, Iraqi Kurdistan’s capital. He assists in supplying other bases with water.

He said he plans to participate in the Kurdish offensive against IS in months to come.

“The American people and Kurds have a special bond that can’t be broken,” Cole said. “I miss my family a lot. But me being here fighting [IS] will give them a safer future.”