You are here: Home / Europe / Western media is playing into Islamic State hands 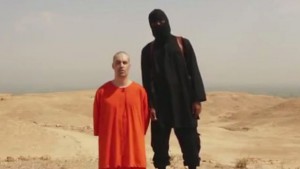 The Western media has become an “unwitting accomplice” of Islamic State by reproducing its brutal jihadist propaganda, a new analysis has found.

Due to the dangers of sending journalists to Syria and Iraq, the media has become dependent on videos and images produced by the Islamic State’s propaganda units, according to a paper published by the Lowy Institute on Monday.

Islamic-State-produced videos of beheadings, mass killings and war victories have helped give the terror regime a “stature it does not deserve” and been a key recruitment tool in luring foreign recruits, author Lauren Williams found.

A former Sydney journalist, she has spent much of the past decade reporting for Middle East-based publications.

“Unwittingly, the Western media has become an accomplice to Islamic State’s aims. Indeed, the process is somewhat self-perpetuating: driven by fear and fascination, the public demand ever more news on the group and its activities,” she wrote.

“This saturation coverage also helps Islamic State to achieve a stature it does not deserve, and helps it to recruit new members and instil fear in its adversaries.”

In her assessment, Tony Abbott’s repeated use of the phrase “death cult” also served Islamic State’s objective of instilling fear in Western audiences.

“Islamic State dedicates greater production expertise and resources to videos depicting the execution of Western captives, recognising the added currency such videos have in the international media,” Ms Williams wrote.

“Stories on Islamic State consistently rank highly on lists of the most read and most viewed news items.

“The dramatic and often brutal nature of the footage that the group publishes, the mystique surrounding the young Western men and women it has been able to draw into its ranks, the dramatic advances and redrawing of borders, along with the portrayal of the group by some Western leaders as the ‘number one evil of our time’ interests audiences.

“The Islamic State group has become unavoidable for even a casual news consumer.”

The level of coverage is akin to the most watched Hollywood celebrities, with some stories based on little more than the fact that an Australian-born foreign fighter tweeted something.

“For example, the Daily Mail has made multiple stories out of an Australian Jabhat al-Nusra fighter posting a video of himself firing a gun. Other outlets have treated the creation of a Facebook page by an Australian Islamic State member as news. This type of coverage could boost Islamic State recruitment, because it makes becoming a foreign fighter a guaranteed path to fame,” Ms Williams found.

Islamic State is aware of its impact on Western media and often times the release of headline-grabbing videos when there is a news lull or when the group wants to distract from a military setback it has suffered.

Content has been produced in English, Arabic, Russian, Urdu, Turkish, and even Hebrew.

One of the group’s propaganda units, Al-Hayat, has produced hundreds of films, including the feature-length ‘Clanging of the Swords’, Parts I, II, III and IV and ‘Flames of War: Fighting Has Just Begun’.

The analysis calls for an expanded set of guidelines to be adopted by the Australian Press Council to update a 2004 initiative around the use of religious terms in headlines and the linking of Islam to terrorist groups.