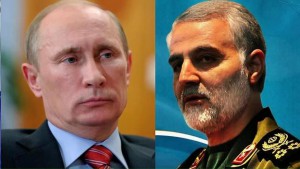 On July 24, one week before Secretary of State John Kerry testified to the Senate Armed Services Committee and faced questions about the newly struck nuclear deal, Soleimani arrived in Moscow for meetings with Russian Defense Minister Sergei Shoigu and President Vladimir Putin. It was not immediately clear what the Iranian leader discussed, but the revelation comes as the United Nations and European Union arms embargo against Iran is slated to be lifted in five years as part of the comprehensive nuclear agreement announced July 14 from Vienna.

Soleimani was first designated a terrorist and sanctioned by the U.S. in 2005 for his role as a supporter of terrorism. In October 2011, the U.S. Treasury Department tied Soleimani to the failed Iranian plot to assassinate the Saudi ambassador to the United States at a popular restaurant in Washington, D.C. The Quds Force is the special forces external wing of the Iranian Revolutionary Guard, responsible for supporting terrorist proxies across the Middle East. It reports directly to Iran’s Supreme Leader Ali Khamenei.

Soleimani is increasingly being recognized as a key player and point person as Iranian influence in the region grows, despite assurances from Kerry and others that Soleimani and the Quds Force will continue to face sanctions from the U.S. Treasury after U.N. sanctions are lifted against Soleimani as part of the nuclear deal.

U.N. sanctions have not yet been lifted against Iran, and Soleimani, as head of the Iranian Quds Force is sanctioned as part of Security Council Resolution 1747. He is prohibited to travel, and any country that lets him transit or travel is defying the sanctions.