You are here: Home / Mediterranean / Western Intelligence on the coasts of Tripoli, with neighboring militias 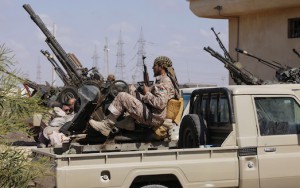 Capital city and largest city of Libya, Tripoli has become no short than a grazing land for militias, military arsenal, western intelligence agents, and some private security companies coming from countries like the U.S., Britain, France, and Italy.

Security companies are managing to coexist together and are collecting data on developments. Doubts indicating the West soon intervening in Libya to fight ISIS, are rising.

Starting March 13, Asharq Al-Awsat will launch a series of investigations in Tripoli, Libya. With all the spread militia and warlords, the Libyan largest city seems to have become the capital for terrorism. Based on documents, observations, and testimonies, a case of rage and confusion among warlords and anti-army leaderships was exposed. The off-board militants, leaders, groups and factions all fear a soon-coming international intervention.

After convening, a number of groups and leaderships went as far as resorting to cooperate with ISIS.

Western security companies have assumed their work, centering themselves in villas resting on the coasts of Tripoli. From within the housing units rose the sound of light music and the scent of Libyan cuisine cooking. The residents allegedly are retired Western officers who formerly worked for Western armies and intelligence.

In contrast, all militias are cooperating and saving no effort in guarding the newcomers. With no significant impact, it seems that for the time being militias and security agents are coexisting with each other.
For four years now warlords occupied Tripoli, and have rendered hopeless on achieving any victories with the national army is continuously advancing and ISIS growing influence across the capital. Even factions formerly belonging to the late Col. Muammar Gaddafi are participating in the war against militants.

The current status forced families belonging to military, political, and security leaders to evacuate the city. They have also left neighboring cities like Misurata, which is situated 187 km to the east of Tripoli.