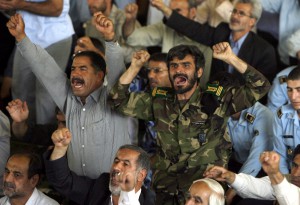 Switzerland is the latest country announcing that it would lift some sanctions against Iran in what it calls a sign of support for the agreement between Tehran and world powers over its nuclear program.

The neutral country’s governing Federal Council decided Wednesday to lift a ban on precious metals transactions with Iranian state entities and end requirements to report trade in Iranian petrochemical products and transport of Iranian crude oil, among other measures.

The sanctions already had been suspended in January 2014. The government, which also cited its “interest in deepening bilateral relations with Iran,” said it reserves the right to reimpose them if implementation of the nuclear deal fails.

Other Western countries have yet to lift sanctions against Tehran, pending verification that it is complying with the nuclear deal.

Nevertheless, it is obvious one result of the recent deal with Tehran is that dozens of companies tied to Iran’s elite Revolutionary Guards, a military force commanding a powerful industrial empire with huge political influence, will win sanctions relief under a nuclear deal agreed with world powers.

The development is likely to anger critics of the accord, not least in the United States and Israel, but may be welcomed by Iranians eager for Iran to reopen to the outside world. The IRGC will act for Western firms in many ways as a gatekeeper to some of the most lucrative areas of Iran’s economy.

Such is the clout of companies with ties to the Islamic Revolutionary Guards Corps (IRGC), which sees itself as the defender of Iran’s Islamic revolutionary ideals and bulwark against U.S. influence, that their release from financial curbs could of itself help ease return of swathes of the economy to the mainstream of world trade.

The process is complex and will unfold in stages, with some firms obliged to wait eight years for sanctions relief and others who can expect no concession even then from Washington, a reflection of concerns over activities beyond Iran’s borders.

Among the latter is the IRGC’s construction arm Khatam al Anbia, controlling at least 812 affiliated companies worth billions of dollars and deemed by Washington “proliferators of weapons of mass destruction”.

The European Union will delist the company for sanctions in eight years, while the United States will maintain its measures against the firm. Foreign businessmen must gauge at that time to what extent they can trade with such partners without themselves inviting U.S. measures.

In all, about 90 current and former IRGC officials, entities such as the IRGC itself, and firms that conducted transactions for the Guards will be taken off nuclear sanctions lists by either the United States, EU or United Nations, according to a Reuters tally based on annexes to the text of the nuclear deal.

A handful will see EU sanctions removed once the nuclear deal is enacted on “Implementation Day” expected within the next year. Others such as Bank Saderat Iran (BSI), accused by Washington of transferring money to groups it deems “terrorist”, such as Hezbollah and Hamas, will have EU sanctions lifted in eight years; but U.S. measures will remain in place.

Most IRGC entities such as the elite Quds force, which carries out overseas operations, and Guards’ airforce and missile command will not be de-listed by the EU until the second phase in some eight years. But all will remain then under U.S. sanction for “terrorism support activities” or as “proliferators of weapons of mass destruction”.

These groups include names likely to cause controversy, at least in the West.

Among them, Quds commander Qasem Soleimani. He has had a high-profile role in advising Shi’ite militia leaders in Iraq as well as the forces of President Bashar al-Assad in Syria.

Also on the list for EU sanctions relief in around eight years is Ahmad Vahidi, a former head of the Guards wanted by Interpol for his alleged role in the 1994 bombing of a Jewish community centre in Buenos Aires. Vahidi denies involvement.

Dozens of smaller companies linked to the Guards, some of which are directly involved in the purchase or manufacture of military materiel, are also scheduled for sanctions relief.

The Obama administration has sought to play down benefits potentially accruing to the Guards from the deal, which eases sanctions in return for curbs on Iran’s nuclear programme.

But the Obama administration’s statements have done little to alleviate the concerns of members of Congress who argue that the Guards will benefit greatly from the lifting of sanctions.