You are here: Home / Europe / West should prepare for chemical attacks by the Islamic State 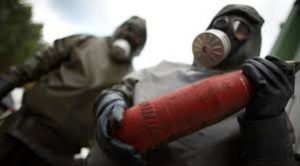 A German newspaper reported last week that at least one European intelligence agency has already warned that the Islamic State is exploring the use of chemicals for attacks in Europe. Such an eventuality would be a radical departure from prior attacks by the Islamic State in the West. In the past, the militant group has shown a strong preference for low-tech means of dispensing violence, such as firearms, vehicles and knives. But it has utilized chemical substances in Iraq and Syria, and its technical experts have amassed significant knowledge about weaponized chemicals, like reported by intelnews.org.

Last week, several European and American counter-terrorism experts participated in a bioterrorism preparedness exercise in Berlin. Codenamed WUNDERBAUM, the exercise was one of several anti-terrorism drills that have taken place in the German capital this year alone. But last week’s drill was the first with an exclusive focus on preparing for a bioterrorist attack. German authorities insisted that the drill was not sparked by concrete intelligence of a pending biological or chemical attack. But the Berlin-based national newspaper Die Welt claimed on Friday that it had information about at least one such warning by a European intelligence agency. The paper did not name the agency, but said that “a foreign intelligence agency” had warned European security authorities of a possible terrorist attack by the Islamic State using chemical weapons. According to Die Welt, the warning was “explicit” and cautioned that the Sunni militant group may be preparing to use improvised bombs utilizing chemicals, including toxic gasses. The warning was communicated to European intelligence agencies, including Germany’s said Die Welt.

How likely is such a scenario? Terrorist groups tend to be conservative in their use of lethal technologies. They typically opt for time-tested methods using explosives or firearms, because these have a higher of success in comparison to more sophisticated, hi-tech weapons. The latter are also more expensive to build and require scientific and technical capabilities that are not typically available to terrorist organizations. Militants are usually strapped for cash, and are not science-savvy, so exceptions to this general trend are rare. But the Islamic State is different. Ever since it made its eventful appearance in 2013, the group has experimented with a variety of chemicals, including nerve agents. It is known that it initiated a modest chemical weapons program, headed by Iraqi engineers who were trained under Iraq’s late ruler, Saddam Hussein. One of them, Abu Malik, was killed in an American airstrike in early 2015. Another, Sleiman Daoud al-Afari, who headed the Islamic State’s chemical weapons program, was captured by US Special Forces in northern Iraq in March of last year.

The Islamic State’s rapid loss of territory in the past year has delivered serious blows to the group’s military infrastructure. Its chemical weapons program, which was targeted early on by the US, Iran and other belligerents, is now almost certainly defunct. But many of its engineers and technical experts are still at large, as are those who were trained by them during the group’s heyday in Iraq and Syria. Despite its continuing retreat, the Islamic State is still capable of employing chemicals that are relatively easy to procure, such as chlorine, hydrogen sulfide, or even various fertilizers, to construct explosives or nerve agents. Last summer, members of a terrorist cell with connections to the Islamic State were arrested in Sydney, Australia. By the time they were arrested, they had already procured significant quantities of hydrogen sulfide and had even tested the chemical, in an apparent preparation for a large-scale attack.

The Australian case shows that the Islamic State is not averse to the tactical use of chemical weapons in terrorist attacks. As the militant group’s self-proclaimed caliphate is disintegrating, and its leaders feel like they have nothing left to lose, the deployment of unconventional terrorist technologies should not be excluded as a tactical option for the organization. Western counter-terrorism officials should actively and immediately prepare for such an eventuality.