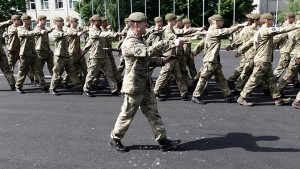 A group of Western nations are planning to send ground troops into Libya to train local authorities and launch attacks against a branch of the Islamic State group, military sources have told The Times of London.

The UK, US, Italy, France, Spain, and Germany will work with the UN and the EU to “rebuild organs of the state and train security forces” according to the report in The Times.

The operation will not be launched until a Government of National Accord is agreed upon. The UN brokered agreement for a unity government has not been initialed by one of the two warring parties, the Tripoli-based GNC government. While the internationally-recognized government the House of Representatives(HoR) in Tobruk has initialled the agreement both the HoR government’s army commander-in-chief Khalifa Haftatr and the chief of the air force have rejected the deal. Libya Dawn, the forces associated with the Tripoli government, also rejects the deal. It is not clear when any unity government will be formed. The military sources told The TImes that the unity government will be put in place imminently. I do not see how that is possible given that the GNC has not yet signed on to any agreement and neither of the two main conflicting military forces accept the agreement.

The UN special envoy to Libya, Bernardino Leon, who brokered the deal met with representatives of the GNC government on Thursday night and Friday in Algiers, to discuss ways to move the dialogue process forward. The GNC rejected the draft that the others signed. The GNC reacted favourably to the fourth draft but when they met to consider it, they found what was in effect a fifth draft in which the fourth draft was modified to remove any power of the GNC to influence or block legislation from the Tobruk House of Representatives(HoR), which is the sole legislative body in the new unity government. These changes were made without being discussed with or approved by the GNC. This resulted in the GNC representatives leaving the dialogue and refusing to initial the agreement. The GNC has demanded that amendments which they have proposed be discussed and changes made to the agreement. So far Leon appears to take the position that the agreement cannot be amended since the other parties have initialled it.

The Times military source said that air strikes would be necessary in the intervention:“You might see movement towards the end of August. Things will then start to move very quickly.” Special forces from the UK, France, US, and Italy will launch operations against the Islamic State. The Islamic State is mostly in control of Sirte and an area around it. In other areas it launches guerilla type actions. It does however have a presence in Benghazi and in the mountains outside of Sirte. The western action could very well turn out to be a continuation of Haftar’s Operation Dignity that is fighting not just the Islamic State but all the Islamists allied with the Tripoli government. What you would have is the west intervening on one side in a civil war. Ironically, it would be supporting a government that has bombed its own people as Gadaffi did and has acted to undermine the peace process while demanding more support for itself from the international community. Perhaps Haftar could be sidelined as he is already being sanctioned by the EU for rejecting the Leon-brokered deal. However, he may not step aside willingly and most of the armed forces are loyal to him rather than the Tobruk government. Sources from the EU and Libya call these actions a “stabilisation” mission a very Orwellian description given the circumstances.

Another report, notes that UK troops are set to be deployed to Libya. The participants in the mission are known as the P3 + 5. The group will seek a UN resolution to authorise their intervention in Libya. While special forces units will carry out counter-terrorism operations the US and France will carry out air strikes. The intervention will probably turn Libya into a disaster area if it goes ahead. Even if there is a unity government formed, that government could very well resist any foreign troops on the ground in Libya. Both the Tobruk government and the Tripoli government object to an EU mission to counter human trafficking into Europe from Libya.