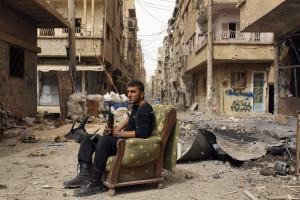 A Russian plan for political reform in Syria will not be a focal point of upcoming Vienna talks aimed at agreeing a roadmap to end the four-year war, Britain’s U.N. envoy said Wednesday.

Russia circulated the eight-point plan that calls for elections after an 18-month constitutional reform process, following the last round of international talks in Vienna on October 30.

“We are aware of the Russian proposals,” British Ambassador Matthew Rycroft told reporters.

“The eight-point plan itself is not central to the discussions in Vienna but Russia is,” said Rycroft.

Around 20 countries and international bodies will meet in Vienna on Saturday to try to agree on a peace plan that would include a ceasefire between Bashar al-Assad’s regime and some opposition groups.

Other Western diplomats dismissed the peace plan presented nearly two weeks ago as a non-starter because it does not clarify the fate of Syrian leader Bashar al-Assad.

The U.S. and its European and Arab allies are demanding that Assad be forced to give up power at some point in the transition, but Iran and Russia have not taken that stance.

One Security Council diplomat described the Russian reform proposal as “back of the envelope stuff” and said it was “not the answer”.

The plan was contained in a document entitled “approach to the settlement of the Syrian crisis” that called for setting up a constitutional commission made up of members of “domestic and outside opposition” groups.

The document specifies that “the president of Syria will not chair the constitutional commission” with the choice to be agreed by the commission’s members.

Under the proposal, parliamentary and presidential elections would be held simultaneously after the constitution is approved in a referendum.

But the document does not specify that Assad would not be allowed to stand in those elections.

“That just isn’t enough,” said the diplomat, who asked not to be identified.

“There has to be greater clarity than that, greater certainty,” he said.

“It has to be part of the final deal that the end point will not have Assad in power.”