You are here: Home / MidEastGulf / Welcome to Idlib, ‘the next Aleppo’ 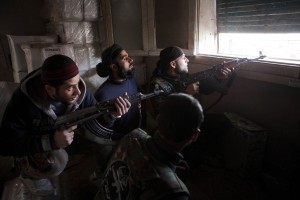 Amid the evacuation of rebel fighters and civilians from east Aleppo, there have been signs of a diplomatic push. Last week, Russian President Vladimir Putin said he and his Turkish counterpart Recep Tayyip Erdogan were working to organise a new series of Syrian peace talks.

On Tuesday, despite the previous day’s assassination of Moscow’s ambassador in Ankara, a meeting took place between the foreign ministers of Russia, Turkey and Iran, resulting in a declaration to revive peace talks.

However, no one should be fooled into thinking that we are on the cusp of a negotiated settlement to the Syrian conflict. President Bashar al-Assad has repeatedly vowed to retake the whole country, typically prior to the start of ceasefires.

His regime’s negotiating strategy throughout the conflict has been to attend talks, behave intransigently and limit the scope of discussion, then use the talks’ resulting failure as a pretext to launch a major military campaign. The regime only engages concertedly in negotiations to arrange local ceasefires and evacuations.

So even if talks do take place anytime soon – whether under the auspices of the UN or of Russia, Turkey and Iran – they are likely to simply be a prelude to another military onslaught by the regime and its allies, buoyed by their recent victory in Aleppo.

As such, speculation is rife as to the next target. In this regard, UN envoy Staffan de Mistura was right to warn last week that Idlib province, in northwest Syria, risks becoming “the next Aleppo”.

From a strategic standpoint, it makes sense for pro-regime forces to eye Idlib as their next target. It is a major rebel stronghold bordering Turkey, which serves as an important supply route.

Capturing Idlib would secure the Damascus-Aleppo highway, which rebels have also used as a supply route, and also neighbouring Latakia, Assad’s home province and a regime stronghold.

Idlib has served as a launch-pad for rebel attacks into Latakia, which is home to Russia’s largest foreign electronic eavesdropping facility and also hosts Khmeimim Air Base, the strategic centre for Russia’s military operations in Syria.

In October, Moscow ratified a treaty with Assad making Khmeimim Russia’s first permanent air base in the Middle East. This makes Latakia an obvious place from which to launch an offensive into Idlib.

Similarly, it would be relatively easy for pro-regime forces to be directed toward Idlib from neighbouring Aleppo province – where they were massed to retake the rebel-held eastern part of Aleppo city – compared, for example, to being sent to Palmyra to the south, which the Islamic State (IS) recaptured earlier this month.  In any case, the US is carrying out airstrikes against IS there.

Corralling those who resist

With Latakia to the west, Aleppo to the east, and largely regime-held Hama province to the south, pro-Assad forces would be able to target Idlib in a multi-pronged assault.

It is in this context that the Aleppo evacuation deal, and others like it, including truces in besieged towns near Damascus and Homs’ al-Waer neighbourhood, should be seen. It is by no means a coincidence that they have entailed relocating rebels to Idlib. This is likely a deliberate strategy, as corralling them into a specific location makes it far easier to target them.

Forcing rebel groups with differing ideologies and allegiances into one area may also be a means of encouraging divisions among them. Infighting among east Aleppo’s rebels, who are now being sent to Idlib, contributed to the regime victory there.

Sending civilians to Idlib may be a regime tactic to put them under the repressive authority of Jabhat Fatah al-Sham (formerly the Nusra Front) and Ahrar al-Sham – the two predominant rebel groups in the province – either as a punishment, or to make them yearn for Assad’s rule.

Since they are jihadist groups, he and his allies would certainly play up their propaganda that they are engaged in a ‘war on terror,’ as a means of justifying an onslaught on Idlib.

Furthermore, since the US-led coalition and pro-regime forces agree on the designation of Jabhat Fateh al-Sham as a terrorist organisation, there may be less international condemnation of an onslaught in Idlib.

We may even see coalition, Russian and regime warplanes hit the same targets, particularly given the good relationship thus far between Putin and US President-elect Donald Trump, who will be inaugurated in a few weeks.

The difficulty in attacking Idlib is that, unlike east Aleppo and other former rebel-held territory, it is not surrounded by the regime on all sides as it borders Turkey, so it cannot be besieged.

However, the diplomatic embrace of Ankara by Moscow and Tehran may be a means of ensuring that it does not get in the way of an assault on Idlib, and limiting its involvement to negotiating terms of opposition surrender and providing humanitarian aid.

Sending rebels to Idlib as a result of evacuation deals means there is the potential for a large and formidable rebel force, one that may recognise the need to close ranks to hold back pro-Assad forces. The problem in that regard, however, is that it plays into the propaganda of the regime and its allies that all rebels are extremists and terrorists, or at least happy to collaborate with such fighters.

Regardless of how this likely campaign plays out, civilians in Idlib are already suffering, with aid workers describing the situation there as a humanitarian disaster, and warning that the influx of refugees from Aleppo will makes matter worse. Talks may be on the horizon, but this will not deter the military ambitions of Assad and his allies.