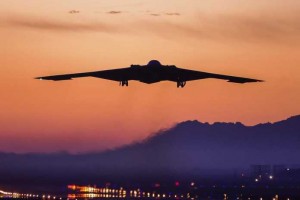 Two B-2 Spirit bombers departed Whiteman Air Force Base, Missouri, for a transatlantic flight to Libya Jan. 18 in what would become the B-2’s first combat mission since Operation Odyssey Dawn in 2011, like reported by defencetalk.com .

The demanding 30-plus-hour mission against two Islamic State of Iraq and the Levant camps required personnel with advanced expertise in the B-2’s capabilities. It also required a firm grasp of total force integration. In essence, it required graduates of the 57th Wing’s U.S. Air Force Weapons School.

“There was a deliberate effort to fill all of the (B-2 strike) seats with weapons officers because of the niche skill set we train to on our (special operations force integration) ride,” said Col. Michael Drowley, the weapons school commandant.

The success of the B-2 strike demonstrated the total force integration training inherent in a weapons school education. This training made B-2 graduates of the 325th Weapons Squadron the natural go-to experts for the North Africa mission.

“(It is) a testament to the awesome job the 325th instructor corps does to prepare graduates to lead in combat,” Drowley said.

The weapons school’s 26 weapons instructor courses employ a building-block approach to produce weapons officers who are not only doctorate-level experts in a platform or specialty, but also trailblazers in total force and joint integration planning and execution.

The final month of each class consists of the weapons school integration phase, a series of complex missions enacted in a highly contested operational environment.

The immediate applicability of WSINT to a real-world situation was highlighted during the B-2 strike.

Prior to the Libya mission, the most recent sortie flown by Capt. Nathan Mueller, the 13th Bomb Squadron B-2 flight lead, was the WSINT offensive counter-air mission he flew in December as a student.

“It was a very humbling experience when my squadron commander told me that I would be flight lead for what would become the B-2’s participation in Operation Odyssey Lightning,” Mueller said. “The dynamic targeting and inherent integration that took place en route to Libya is not something that B-2 pilots train for on a regular basis. It was, however, very much a part of the weapons school syllabus, particularly during WSINT.”

The weapons school instructors do not often have the opportunity to reap the benefits of the WSINT training so quickly.

“We’re obviously extremely proud of the work our graduates did in combat,” said Lt. Col. Daniel Hoadley, the 325th WPS commander. “It’s especially gratifying to see one of our graduates lead this mission on his first B-2 sortie after weapons school. I would equate it to practicing football plays with your kid in the back yard for six months and then watching them score the winning touchdown on their first game!”

The true value of any integration training, however, lies in its ability to forge weapons officers who can lead and work with diverse forces.

During the strike in Libya, for example, the B-2 personnel collaborated with multiple KC-135 Stratotanker, KC-10 Extender and MQ-9 Reaper crews to achieve the mission. The 325th WPS reflected the weapons school’s “humble, approachable, credible” motto when discussing the strike.

“We recognize we are a very small piece of the big team that led to success on this mission,” Hoadley said.

The weapons school plans to multiply the value of its integration training, from 2017 forward, with more syllabus opportunities earlier in the class and joint partnerships.

This expansion will ensure weapons school graduates continue to provide top-notch leadership to any mission they are called to do.

“I lost count of the number of times we did something in our formation because of a lesson learned during weapons school,” Mueller said. “I can’t think of any higher praise for a program than when combat feels like the training scenarios.”