You are here: Home / Mediterranean / Weapons from Turkey to the Libyan Islamists 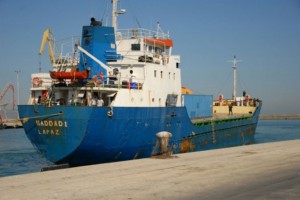 Weapons and ammunition found on a ship that was headed to Libya’s western port city of Misrata, controlled by Islamist group Libya Dawn, were manufactured in Turkey.

The International Business Times UK quoted investigating officials as saying that the weapons were likely to have been bartered for oil, at a time when the civil war torn country is under a UN arms embargo.

The Greek coastguard seized the Bolivian-flagged vessel Haddad 1 off the island of Crete earlier in September, and a cargo search revealed almost 500,000 rounds of ammunition and 5,000 rifles along with over 4,900 cartons of cigarettes.

Although Greek authorities have not yet ascertained where the illicit cargo was loaded, initial evidence suggests it was Iskenderun, a Turkish city about 50km from the Syrian border, the last port visited by the Haddad 1 before it was intercepted.

An official who spoke to IBTimes on condition of anonymity said that cargo documents stated that the ship carried only household items. Furniture pieces were on board, but only as camouflage for the weapons.

As news of the ship’s seizure was first reported earlier this month, the Turkish foreign ministry claimed that the shipment was fully documented and destined for the Sudanese police force.

Yavex, the Turksih manufacturer of the ammunition found on board also said its ammunition had not been shipped to Libya but the “law enforcement of a different country”.

“All international transportation and transfers of our company are well documented and recorded. All business activities are fully legal according to national and international rules and laws,” the company said.
“No one in our company can have any business relationship with any illegal or suspected organisation. All transfers and documents about this shipment are legal and under permit and license of [the] Turkish government. We believe the current case will be solved clearly.”

However, the Greek official said that nothing on board the ship “established any link with any Sudanese entity, public or private” and that they didn’t find any documents connecting the cargo with Sudanese territories.

Two Indians and one Egyptian have been arrested and indicted on charges of illegal smuggling and remain in pre-trial detention pending the ongoing investigation. Their names have not been released but Greek authorities said they do not have any known previous criminal convictions.

The ship, currently docked at the Cretian port of Iraklion, in Crete is currently banned from European ports due to safety issues raised in Spain in 2014.

It is currently owned by an Egyptian company called Haddad Shipping SA, headquartered in Alexandria. However, operations are delegated to another company, the Syria-based Phoenicia Maritime LLC, which uses as its registered address a post office box in the regime-controlled port city of Tartus that hosts a naval facility for the Russian Navy.