You are here: Home / MidEastGulf / ‘We will find you and we will kill you’. Warning to would-be Islamic State fighters 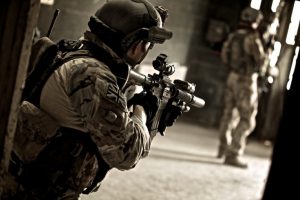 “We will target you, we will find you, and we will kill you,” is the warning from Britain’s top commander in Iraq and Syria to any foreign fighters travelling to join so-called Islamic State in the region, like reported by itv.com.

Major General Rupert Jones added it did not matter where people came from, as they would all be treated the same.

The deputy commander of the international anti-IS coalition shared similar sentiments about the leader of the “evil organisation”, Abu Bakr al-Baghdadi.

“If we knew where he was hiding, his life would not last long,” Maj Gen Jones said, predicting he would not come to “a pretty end” and that he was “confident he would be found”.

“The point that is important is that the vast majority of his loyal lieutenants are already in graves,” he said, adding: “He and what is left of his leadership structure is in hiding. They are skulking and they are hiding for their lives.”

The “liberation” of Mosul would mean the defeat of so-called Islamic State in Iraq, he added.

The city of 1.5 million people has been a so-called Islamic State – also known as Daesh – stronghold for two-and-a-half years, but coalition forces are edging closer to recapturing it.

While in Syria the focus is on Raqqa, “the self-proclaimed capital of what they like to call the caliphate”.

The international coalition’s mission it to liberate the people of Iraq and Syria from so-called Islamic State.

British troops are not involved in combat missions in either of the countries, but they are helping to train Iraqi security forces.

While Maj Gen Jones said he was “confident” so-called Islamic State would be defeated, he added that they “are highly determined fighters and we should assume that they will adjust and that they will try and continue to spread their message of hatred within Iraq and elsewhere”.

“And we see that day in day out, in all of the towns and cities that Daesh control.

Maj Gen Jones said he was both surprised and not surprised but what he had seen.

“Nothing surprises me about Daesh. They are capable of anything – we have all seen that.

“We should never wake up one morning and go ‘oh look, it’s another beheading’, or ‘oh look they’ve just executed more people’, that should always be shocking. But regrettably there is no surprise in it.

“Seeing what Daesh do to innocent people, that has no humanity. What we are here to do is to clear the enemy so that people can live their lives again.”