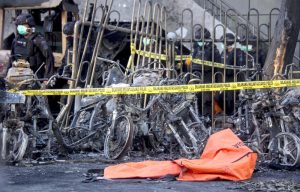 A wave of ISIS-claimed suicide attacks in Indonesia showed a disturbing new trend — the family that bombs together.

This comes after years of an intense focus by the terror group on training youths, even very young children, in the ways of jihad, like reported by pjmedia.com.

The Sunday attacks on three churches, followed by an accidental detonation during explosive-device construction that evening and an attack on a police station the next day, led Indonesian authorities to announce new crackdowns on online extremist content.

In Surabaya, mother Puji Kuswat brought her 9- and 12-year-old daughters to the Indonesian Christian Church. She detonated a bomb on one of her children before detonating her own suicide bomb, authorities said. After dropping off that bombing team, father Dita Sopriyanto drove to the Pentecost Central Church and detonated an explosive. Two teenage sons went to Santa Maria Catholic Church and detonated suicide bombs. Thirteen people were killed.

The father was believed to be head of a Jamaah Ansharut Daulah cell, a splinter of Bali bombers Jemaah Islamiyah and a group that pledged allegiance to ISIS. Officials said the family had lived with ISIS in Syria and returned home last year. They suspect that the attacks may have been ordered from ISIS HQ in response to a prison riot days earlier in which five counterterrorism officers and one inmate died; ISIS said their militants started the uprising.

Through its Amaq news agency, ISIS claimed the “martyrdom attacks” and said they focused on “Christians and church security guards.”

That evening, explosives ripped through a family apartment in Sidoarjo when an accidental detonation occurred during bomb construction. A mother, father and son were killed, according to local media, while two young children who had been in another room at the time were rescued from the unit.

The next day, in an attack captured on surveillance footage, another family pulled up to a police station checkpoint in Surabaya and detonated their bombs. An 8-year-old girl they’d brought along was tossed some 10 feet in the air by the explosion but survived. Ten people were wounded.

It’s the first time young children have been used as bombers by ISIS in Indonesia.

The terror group ran an extensive jihad immersion program for kids — or “cubs,” as ISIS calls them — in their occupied caliphate territories, and encouraged couples to have many children to add to the terror group’s future ranks. They even developed kids’ apps that encouraged attacks and jihadist training. ISIS “cubs” have been featured in gory training videos, including child jihadists hunting down bound prisoners and young kids killing prisoners tied to ruins of carnival games.

Counterterrorism officers arrested more terror family members in Tuesday night raids. The brother of Anton Ferdiantono, who was constructing the bomb in his family’s apartment in Sidoarjo, was killed in one of the raids after allegedly attacking officers with a knife. His wife and four children were taken into custody.

The church attacks coincided with Mother’s Day in the U.S., though Indonesia celebrates Mother’s Day on Dec. 22. Last year, ISIS told wives of jihadists that they “should recognize and take advantage of” kids being “raised in the home and under the wing of a mujahid father.”

“So they grow up with their eyes becoming accustomed to seeing weapons and equipment, including rifles, tactical vests, bullets, grenades, and explosive belts. Likewise, watching the mujahidin’s video releases and following their written and recorded news nurtures within the lion cub the love of jihad and the mujahidin and hatred towards their enemies,” ISIS continued. “The mother may hear criticism from some people who would argue that the manner in which she raises her children might kill their childhood and destroy their innocence.”