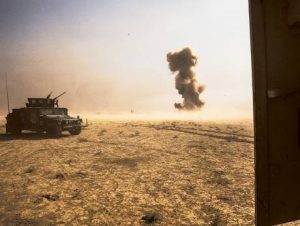 Iraqi troops encountered the “heaviest” clashes yet with Daesh group fighters Sunday in western Mosul since the start of the new push more than two weeks ago, according to a senior commander, like reported by arabnews.com .

Maj. Gen. Haider Al-Maturi of the Federal Police Commandos Division told The Associated Press that Daesh militants dispatched at least six suicide car bombs, which were all destroyed before reaching the troops. The militants, he said, are moving from house to house and deploying snipers.

The wave of heavy resistance comes as Iraqi forces launched attacks against Daesh-held neighborhoods in western Mosul from three points Sunday morning. The Federal Police are closing in on the city’s main government complex in the Dawasa neighborhood and Iraq’s special forces are attempting to push into the Shuhada and Mansour neighborhoods.

Daesh fighters have “some mortar (teams) and snipers positioned inside homes,” said Iraqi special forces Maj. Ali Talib, explaining that US-led coalition airstrikes have helped destroy some of the Daesh defenses, but clashes are still ongoing.

Al-Maturi, of the federal police, said his troops are now some 500 meters away from the government complex.

The push on Mosul’s west was launched about two weeks ago after the eastern half of the city was declared “fully liberated” in January. The operation to retake Mosul officially began in October after more than two years of slowly clawing back territory from Daesh militants. Daesh overran nearly a third of Iraq — including Mosul the country’s second largest city — in the summer of 2014.