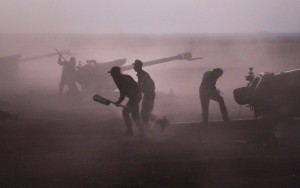 As Russia continues airstrikes in Syria, a fight is brewing between members of Congress and U.S. intelligence agencies over what lawmakers were told about the Russian military operations, and when.

The House Intelligence Committee, which oversees the CIA and other spy agencies responsible for tracking the Russian military buildup in Syria, is “looking at possible problems in the timely provision of information to Congress,” a congressional staff member told The Daily Beast. Three other officials confirmed that the inquiry–which is not a formal investigation–is underway and that lawmakers have been talking to intelligence officials about whether their reports to Congress accurately predicted when the Russian air strikes would begin and that they would target rebel groups fighting the regime of Bashar al-Assad .

U.S. intelligence officials fired back that they had provided lawmakers with warnings about Russia’s intentions to begin military operations in Syria, including in the weeks before airstrikes began in late September.

“Any suggestion that the intelligence community was surprised by Russia’s military support to the Assad regime is misleading,” a senior intelligence official told The Daily Beast. Members of Congress had access to intelligence reports on the movements of Russian aircraft into Syria as well as the buildup of ground troops and could read them anytime they chose to, another official said.

Russia has long been a subject of close scrutiny for the CIA and other intelligence agencies. But since the end of the Cold War and a post-9/11 shift to focusing on terrorist organizations and the rise of extremist groups, some lawmakers have questioned whether the agencies are paying enough attention to old foes in Moscow.

“For several years, the Intelligence Community has provided regular assessments of Russia’s military, political, and financial support to the [Assad] regime,” Brian Hale, a spokesperson for the Director of National Intelligence, said in a statement. “In recent months, the Intelligence Community tracked and reported Moscow’s determination to play a more direct role in propping up Assad’s grip on power, including its deployment of offensive military assets to Syria. While these events unfolded quickly, the IC carried out its responsibilities with equal agility.

The pushback from officials underscored how sensitive the agencies are to allegations of “intelligence failures” and in particular being behind the curve about Russia’s international ambitions and the rise of extremists groups in the Middle East. The Defense Department is also investigating allegations that senior intelligence officials at the military’s Central Command manipulated intelligence reports to paint a rosy picture about the U.S.-led air campaign against ISIS in Iraq and Syria.

The congressional inquiry also highlights how politicized the Obama administration’s strategy in Syria has become in the wake of a total breakdown in the U.S. military’s training of rebel groups and a 13-month-old U.S.-led air campaign that has failed to destroy the forces of ISIS in Syria or Iraq.

The White House defended the quality of the intelligence reporting on Syria and noted that journalists had also been tracking the deployment of military aircraft and ground troops into the country.

“I don’t think there was anybody that had the expectation in the administration that Russia wasn’t prepared to use that equipment to advance what they view as their interests inside of Syria,” White House Press Secretary Josh Earnest said on Thursday, adding that officials had already assessed Russia wanted to prop up the embattled Assad regime before the airstrikes began.

“I don’t think that’s a surprise,” Earnest said. “The President, before Russia commenced their military activities, said that a decision by Russia to double down on Assad militarily would be a losing bet. That’s something that the President said before we saw this Russian military activity and we continue to believe that that’s true.”

Reuters first reported that lawmakers were examinig possible intelligence lapses over Russia’s intervention and were concerned that intelligence agencies were slow to grasp Putin’s intentions.

That’s a charge that lawmakers have made in the past.

After Russian forces invaded the Crimean peninsula in Ukraine in 2014, lawmakers blasted the Pentagon and intelligence community for failing to anticipate Putin’s plans.

“It was not predicted by our intelligence.That is well known, which is another massive failure because of our total misreading of the intentions of Vladimir Putin,” Sen. John McCain told then-Defense Secretary Chuck Hagel during a hearing. That prompted James Clapper, the director of national intelligence, to defend his analysts’ work.

“I have lived through some genuine intelligence failures in my career, and this was not a failure by any stretch,” Clapper said in an interview with Washington news radio station WTOP in March 2014.

“We tracked [the situation in Ukraine] pretty carefully and portrayed what the possibilities were and certainly portrayed the difficulties we’d have, because of the movements of Russian troops and provided anticipatory warning of their incursion into Crimea,” Clapper said.

Three months later, when ISIS forces rolled into the Iraqi city of Mosul and established a major foothold inside the country, the agencies again found themselves on the defensive, recounting all the times they’d said they warned lawmakers about the rising strength of ISIS in the region and how it could threaten security. Critics said, however, that the intelligence agencies hadn’t predicted ISIS would take over whole cities, and that the reporting wasn’t specific enough to develop a counterattack.

The debate over intelligence assessments on Russia’s recent airstrikes has a similar theme. Lawmakers are zeroing in on specific reporting about military movements and potential targets, as well assessments about Putin’s intentions and his strategy, to get at the question of how the U.S. response to Russia’s operation might have been different with other kinds of information.

Rep. Adam Schiff, the senior Democrat on the House Intelligence Committee said in a statement on Thursday that it was “certainly true that few would have predicted that Putin would react to the weakening position of the Assad regime by sending in combat aircraft and augmenting its naval presence. An increase in Russia’s material support for the Assad regime seemed much more probable.”

That suggested that some lawmakers viewed the intelligence assessments as not declarative or precise enough for Congress to understand how the events would unfold.

But, Schiff added, “As Putin’s intention to deploy more military power to Syria became clearer in recent weeks, the Intelligence Community kept the Committee apprised of those developments. Although we will continue to look into the timeliness and accuracy of intelligence assessments, I do not think we should rush to find fault with the Intelligence Community in its ability to discern exactly what is in Putin’s head.”

Military and intelligence officials did warn that Russia was likely to being military operations in Syria in the days before air strikes began.

Nine days before Russia’s first bombing runs on Syrian rebel groups, including those that the CIA had given weapons and training, three U.S. officials told The Daily Beast that airstrikes would begin “soon.” They noted that Russian drone flights to scout potential targets were underway–those same flights were also reported on social media by eyewitnesses in Syria.

The officials’ assessment on the imminence of Russian airstrikes marked a shift from previous statements, when officials had said they weren’t sure whether Russia intended to use force in Syria and enter into the country’s long and brutal civil war. That shifting analysis reflected the rapid increase in the number of Russian jets in the region, as well as reports by eyewitnesses that Russian military forces were working with Assad’s army. Videos supporting those claims could be found on YouTube.

And yet, those aggressive, visible moves were met with hardly a shrug in some circles in Washington.

“There are not discussions happening here about what this means for U.S. influence on the war against ISIS,” one defense official told The Daily Beast at the time.

In light of the administration’s response, it’s questionable whether more precise assessments of Russia’s movements would have led to any attempts to head off its intervention.

Schiff, the top Democrat on the House intelligence committee, said that reading the Russian leader’s mind was all but impossible.

“Putin notoriously keeps a tight counsel and employs a deliberate strategy of improvisation and unpredictability,” Schiff said. “That said, we need to make sure that we appropriately prioritize so-called hard targets like Russia.” (Thedailybeast)