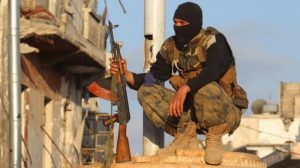 The United States Department blacklisted Hay’at Tahrir al-Sham (HTS), commonly referred to as Tahrir al-Sham, on Thursday labeling it a terrorist organization and a mere rebranding used by Al-Nusra Front, another already designated terror group, like reported by aawsat.com.

Nusra Front, an al-Qaeda branch in Syria, established HTS in January 2017 as a means to strengthen its position in the Syrian conflict and achieve its personal agenda.

“In January 2017, Nusrah Front launched the creation of HTS as a vehicle to advance its position in the Syrian uprising and to further its own goals as a Qaeda affiliate. Since January 2017, the group has continued to operate through HTS in pursuit of these objectives,” said the statement issued by the Department of State today.

The Coordinator for Counterterrorism Ambassador Nathan A. Sales, noted that the designation serves as a reminder that the US is not fooled by Qaeda offshoot attempt to rebrand itself. “Whatever name Nusrah chooses, we will continue to deny it the resources it seeks to further its violent cause,” Sales said.

“Today’s actions notify the US public and the international community that HTS is an alias of Nusra Front. Terrorism designations expose and isolate organizations and individuals, and deny them access to the US financial system. Moreover, designations can assist the law enforcement activities of US agencies and other governments,” he added.

The US Treasury Department listed the many names taken by the Nusra Front as a cover.

The Department of State has amended the designation of Nusra Front to include Hay’at Tahrir al-Sham (HTS) and other aliases.

These aliases have been added to Nusra Front’s designations as a Foreign Terrorist Organization (FTO) under Section 219 of the Immigration and Nationality Act, and as a Specially Designated Global Terrorist (SDGT) under Executive Order 13224.

Nusra Front is one of the organizations that belong to extremist ideology and is an arm of Qaeda in Syria and was formed during the outbreak of the Syrian crisis in 2011.

Nusra Front is responsible for carrying out several suicide attacks in Aleppo and Damascus and called on Syrians to take up arms. The US government placed it on the list of terrorist organizations in December 2012.