You are here: Home / Analysis / Was Iran behind the massive Palestinian rocket attack on Israel? 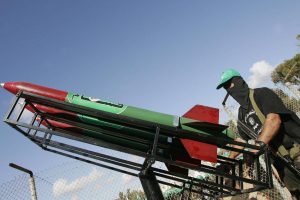 A massive Palestinian rocket barrage – involving some 600 rockets from Gaza in a 24-hour period, reaching the crescendo of hundreds of rockets fired around nine in the evening, blanketing central and southern Israel – may be linked to Iran’s warnings about a single, large operation, like reported by meforum.org.

Iran’s Islamic Revolutionary Guard Corps (IRGC) head Hossein Salami warned last week that Israel was vulnerable to one large tactical operation because the country is so small. He pointed to the S-200 fired from Syria near Dimona and other threats to Israel as an example of how vulnerable the country is.

The massive rocket fire launched on May 11, an unprecedented series of barrages targeting Ashkelon, attempting to test the abilities of Israel’s multilayered air defenses, appear to be part of an Iranian-inspired plan. This is because Islamic Jihad, an Iranian proxy, is involved in the rocket fire and because Hamas is backed by Iran.

It isn’t the first time, of course, that these groups have launched massive rocket attacks, or the first time they targeted Jerusalem and Tel Aviv. The unprecedented aspect relates in part to the volume of fire, sometimes more than 100 rockets in several minutes, and also the nature of the concentrated attack on Ashkelon.

The lessons being learned by Iran are clear because the Islamic Republic and its friends among Hezbollah have all been predicting that Israel is in decline. This was what was said clearly by Hassan Nasrallah and Iran’s supreme leader. The message from Tehran was not just that Israel could be harmed by a large tactical strike, like a mass of rocket fire, but also that the country is harmed by internal divisions and that it can be broken by a spark like this fire.

Iran pays close attention to Israel’s internal politics and media. Nasrallah also does. He was watching the story about the dozens of Israelis killed on Mount Meron. Iran has been studying Israel’s method of retaliation and also its ability to manage the conflict with Hamas. This “management” has gone on for years since the 2014 war. It has involved numerous rounds of conflict in which Israel would carry out airstrikes, but would avoid a ground operation.

Several times over the years, Israel came close to an operation in Gaza. Hamas, Hezbollah and Iran also know that Israel is in the midst of a political crisis, where the prime minister may face a fifth round of elections, and they have watched closely the al-Aqsa tensions and clashes in Israeli cities such as Lod. This is the prophecy that Iran thinks is being fulfilled.

The Hamas escalation, which it claimed was in response to Israeli airstrikes, appears to be far more harsh than any airstrikes would have led to. Hamas is driving the conflict. It set the rules on the evening of May 10, demanding Israeli forces leave the Temple Mount and Sheikh Jarrah. It knew this wouldn’t happen. So it then had an “excuse” to attack. Then it said it would strike at Tel Aviv.

Hamas is setting the pace – and that pace may be one that is being watched or even guided from Iran. This may be due to the fact that Hezbollah wants to know what it looks like when Israel is faced with a large amount of rocket fire. They will be paying attention to every instance where rockets made it through.

The images coming from Israel, of internal clashes in places like Lod, the political pressure mounting on Israel from abroad and the method of rocket fire will be analyzed in Tehran and Beirut and among pro-Iran proxies in Syria and Iraq and Yemen.

Hamas has also shown over the years, firing rockets out to sea, that it has kept itself limbered and ready for the next round. Many had said Hamas was ossifying after 14 years in power with little to show for it. It wanted elections in the Palestinian Authority to break out of Gaza, but it didn’t get to have those elections. Its rockets are what it has left.

However, it has also shown it can dictate the tempo, a tempo and a tactical operation that Iran predicted a week ago in a Quds Day message. That message reached Gaza and Islamic Jihad; it now has reached Tel Aviv and Jerusalem through rockets.